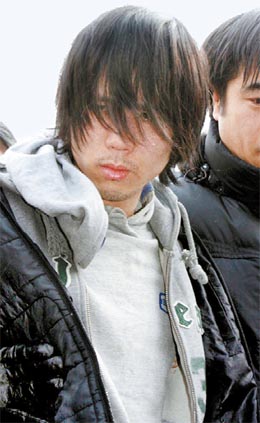 Kim Kil-tae, the suspect in the rape and murder of Lee Yu-ri. By Song Bong-geun

The 33-year-old convicted rapist who allegedly sexually assaulted and killed a middle-school girl in Busan is under arrest.

The location of his capture was just some 200 to 300 meters (656 to 984 feet) away from the site where 13-year-old Lee Yu-ri was found dead and naked inside a water tank on Saturday.

“Police opened an entrance door of a rooftop house at a three-story villa in Sasang and found a person who seemed to be Kim and yelled his name,” Kim Young-sik, who headed the investigation for the Busan Metropolitan Police Agency, said during a press briefing yesterday.

“The suspect ran away and got to the ground, where he started walking slowly.

“But an officer who was patrolling near the villa spotted him. When the officer approached within three or four meters of Kim, he ran again” - into another officer, and fell to the ground, the policeman said. 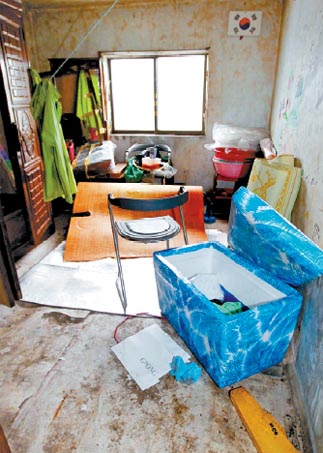 A small hideout where Kim Kil-tae had been staying to dodge police investigators. By Song Bong-geun

He said Kim scuffled with the officer for about five minutes before two other patrolmen arrived and helped make the arrest.

The suspect was immediately transported to the Sasang Police Precinct, where he told the media throng he had been staying in empty houses and denied he had raped and murdered Lee.

As he walked inside the station, Kim kept his head low and did not apologize to the victim’s family.

Lee’s family had not commented to the press as of last night.

Kim had been on the run for 15 days, during which time police had faced fierce criticism for their inability to capture the suspect.

Police said they plan to interrogate Kim about his alleged motive and methods behind the crime.

Lee disappeared from her home in Sasang on Feb. 24, some time after she talked with her mother on the telephone around 7 p.m.

Police initially investigated the case as a kidnapping after they found evidence of a break-in at the home and apparent footprints of an intruder. They kept the matter a secret until they opened a formal criminal investigation on Feb. 27.

Police named Kim Kil-tae as the prime suspect on March 1 after they found fingerprints and other evidence at the girl’s home.

Within a day, wanted posters that included Kim’s personal information had been distributed throughout the country.

Investigators found Lee’s dead body in a water tank some 50 meters from her home.

The victim was undressed and covered with calcium carbonate at the time.

The National Institute of Scientific Investigation verified on Monday that Kim’s DNA was found in Lee’s body. Forensic evidence recovered from the body matched the DNA of the convicted rapist.

The police launched a nationwide search for the Kim and released his photo.

Investigators initially put up a five million won ($4,390) reward for information leading to Kim’s arrest, but raised the amount to 20 million won on Friday.