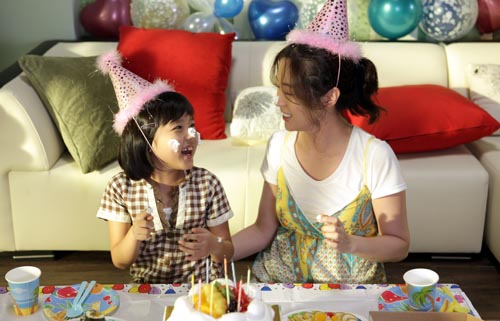 One scene kept playing over and over again in the back of my mind while I was watching “Wedding Dress,” a recent release starring Song Yoon-ah, who plays a mother with a terminal illness.

Unfortunately, it wasn’t a particularly soul-stirring anecdote from the movie, but rather an image of the film’s editors gathered at a studio after hours, saying, “Let’s cut right here. This is the money shot! Let the tears flood in.”

In the film, recently-wed actress Song Yoon-ah plays Go-un, a wedding dress maker and young widow who is raising her young daughter, So-ra, played by child actress Kim Hyang-gi, on her own.

From the beginning of the film, Go-un is aware of her fate, having already been diagnosed with gastric cancer.

Always the protective and loving mother, Go-un tries to keep her illness a secret while doing everything she can to make the best of her last days with her daughter.

With a simple plot like this one, every other element in the film, from the dialogue and the acting to the soundtrack, has to be meticulous in order to avoid being an absolute cliche.

In “Wedding Dress,” however, especially every 10 to 15 minutes of the latter half of the movie, it was as if the audience was being told by the director that “this” was the appropriate time to cry.

The music becomes softer, a character makes a vaguely poignant remark, the camera starts to zoom in on the characters’ faces and, voila! - a tear-worthy moment.

If the director had wished to take the realism route, the story would have benefited greatly from showing the audience more sides of Go-un as a person, rather than just letting us see that she is a dying mom. Besides the fact that she makes wedding dresses and is a single mom, the audience doesn’t really have the opportunity to get a sense of who she really is.

Did she have any marital conflicts before her husband’s death? What is her biggest fear as she now faces death? Is she a dreamer or a realist?

Instead of providing us with any insight into her inner struggles, the character Go-un goes on with her almost caricature-like, exaggerated cheerfulness in order to please everyone around her and conceal her illness as long as she can.

The daughter character also seemed thoroughly fictional in that her coming-of-age moments are played out too abruptly, especially when she pretends to be in the dark about her mother’s approaching death.

Ultimately, the third-person point of view taken for the film worked against it, and the audience ends up feeling aloof and distant from the story.

The whole movie gives the impression that the director was dabbling around with a potential tearjerker of a topic but was unable to locate the emotional pulse of the characters in his midst.