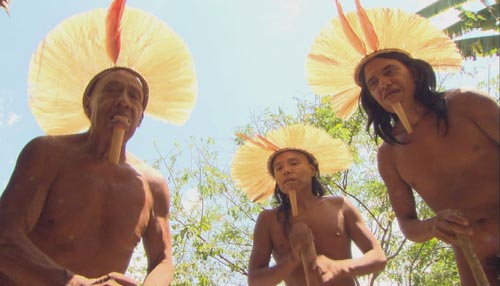 “Tears of the Amazon” draws on footage of native people in South America. Provided by MBC

Local theaters are flooded with handsome, gun-toting protagonists and serious scientists who save the earth from the worst disasters. But in recent months, a crop of documentary films is surviving their competition and attracting a steady stream of moviegoers. That’s quite a feat on the nation’s film scene, where even special effects-laden blockbusters face stiff competition for the attention of the movie-savvy public.

Support for documentaries began with “Old Partner,” which was released in January 2009. The documentary, which is about the bond between an elderly man and his 40-year-old cow, attracted nearly 3 million viewers and became the sleeper hit of the year.

Meanwhile, local broadcasting station MBC announced late last month that its documentary trilogy titled “Tears of the Amazon,” will move to the big screen when it is released on March 25. The three-part documentary claimed an audience share of 25 percent, which is rare because most documentaries claim audience shares in the single digits.

The success of the Amazon trilogy has sent a shock through the nation’s broadcasting scene and reinforced the idea that a well-made documentary can become a success.

“We used about 500 videotapes, each one 40 minutes long, and filmed life along the Amazon for 300 days,” said Namgung Seong-woo, an official who is in charge of promoting the documentary for MBC’s public relations team.

The producers of the film found it was difficult to limit themselves to a three-part series, so they decided to make a feature-length film. They had collected a vast amount of material and felt they had a larger story to tell.

“Since people in the Amazon practice natural ways of living, wearing no clothes, for example, there were limits to what the producers could make for TV,” Namgung added.

Unlike the documentary, the film will not blur the nudity of the people they captured on film and it will add scenes which were believed improper for a television audience. With a running time of 80 minutes, the documentary will be screened at about 30 theaters nationwide for people aged 15 or older.

This is not the first time MBC has turned a TV documentary into a feature film. Documentary hits such as “Tears in the Arctic” and “Happy Ulleung Person” were also expanded into full-length features and screened at theaters.

EBS, a state-run broadcaster specializing in education, also said last month that a sequel to its previous documentary titled “Korean Dinosaurs” will be made into a 3-D movie later this year prior to its regular broadcast, which is scheduled for early next year.

Meanwhile, the documentaries “Into the Great Silence” and “Restoration” have both had success at the box office. Restoration was released Jan. 14 and has already attracted 30,000 viewers. It deals with the conflicts between Christians and Jews in Israel.

Into the Great Silence, a story about a group of monks living in an isolated monastery, opened on Dec. 3 last year at just one theater but it is now being screened at eight theaters, with attendance of approximately 100,000 people.

“It’s hard for an independent art film to attract 10,000 viewers. In that sense, Into the Great Silence hit the jackpot,” said Jang Seon-young, team head at film production Jin Jin, which imported the documentary.