Two minds between illusion and reality

Two minds between illusion and reality 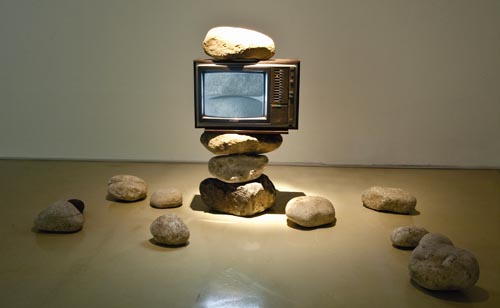 It’s a tower of stones - but wait, those two stones in the middle aren’t real. They’re images projected on a television. It’s such an effective illusion that from far away one might think that it’s simply a TV frame hung over a pair of real stones. The work blurs the border between real objects and their representations.

This is the work of Park Hyun-ki (1942-2000), shown at “The Pioneer of Korean Video Art Park Hyun-ki: A Retrospective,” an exhibition at Gallery Hyundai in the Samcheong-dong neighborhood in central Seoul.

It’s just one of the exhibitions running this month that are likely to excite fans of multimedia art.

The Park retrospective has already opened, and will continue until March 28. Another by the even more famous Paik Nam-june starts tomorrow at the Nam June Paik Art Center in Yongin, Gyeonggi.

Whereas Paik is familiar to art critics worldwide and to the Korean public, Park is known among only specialists.

“Before Park, nobody had tried to juxtapose real objects found in nature with the illusions of objects on a video monitor, which was a rare medium of art at that time [during the 1970s],” said Koh Hee-kyung, a manager at the gallery.

“He used stones in particular as ‘found objects,’ as stones have great meaning in philosophy and aesthetics in East Asia,” she continued. “It contributed to the history of modern Korean aesthetics. He also created many unprecedented experiments, so it is very regrettable that the public is not familiar with him.” 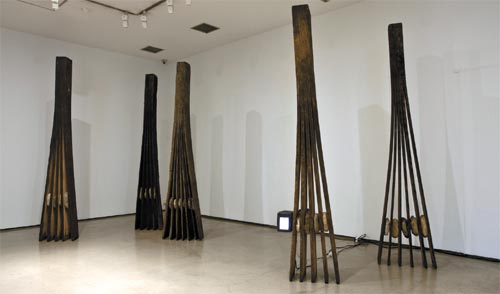 In fact, Park received a great deal of attention from other artists and art critics overseas with his “Video Stone Towers,” leading to an invitation to participate in the 1979 Sao Paulo Art Biennale and the 1980 Biennale de Paris.

At the 1979 event, Park held a performance titled “Inclining Water,” and a series of photos taken of that performance are part of the exhibit at Gallery Hyundai. In the photos, Park tilts a video monitor displaying an image of water tilting in turn, giving the illusion that the television is full of water.

Unfortunately, at that time Korea was gripped by political and social turbulence, and art, especially the emerging field of video art, was a distant luxury they could not afford. Moreover, Park worked and held exhibitions mainly in Daegu, his hometown, instead of Seoul, where it would have been easier for him to attract public attention. In 2000, just as the Korean public’s interest in art began to develop at last, Park passed away from cancer. This is why Park is less well known here, Gallery Hyundai explained.

“The public’s acceptance of video art as a vital form of artistic expression has spread over recent years as the regularly held media art biennale promoted [media art] as the country’s technology saw dramatic advances,” Kang Tae-hi, professor at Korea National University of Arts, wrote in a paper for the exhibition. “However, study of the artist who initiated it all has not seen much progress.”

According to art critics, Park began to consider the possibility of working with television images when he first encountered the work of Paik Nam-june in the mid-1970s.

“We must be careful, however, not to over-emphasize the shadow of Paik’s influence on Hyun-ki Park’s work,” Kang wrote. “Park’s approach to video and technology rather resembles the growing interest in objects and material in Korean art of the ’70s, East Asian philosophies and the Japanese Mono-ha movement, which rejected Western modernism that focused on artist expression or intervention.

“He realized the technical limitations of his own experience in the field unlike Paik,” Kang wrote. “Consequently, he resolved to free his video work from technology and find his own vocabulary by the means of ‘low-technology.’” 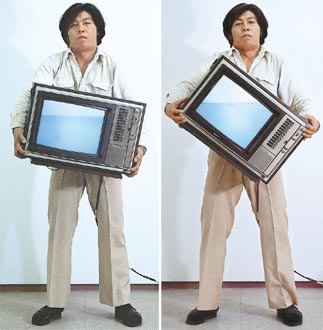 These photos were taken of Park’s performance “Inclining Water” at the 1979 Sao Paulo Art Biennale. Provided by Gallery Hyundai

The exhibit shows that Park was indifferent to the characteristics of video - namely that it can be edited and changed quickly. Instead the videos in Park’s work show natural objects ranging from stones to waves, without editing.

Sometimes they are juxtaposed with “real” objects, provoking questions about reality and illusion. One video looks down at the waves of the Nakdong River, with a mirror placed at the bottom reflecting the water’s surface. The footage runs on several TV monitors with delicately adjusted color tones, appearing like a series of abstract paintings.

A visit to the Nam June Paik Art Center immediately after a walk through the Park retrospective shows just how different the two artists really were.

Whereas most of Park’s video art is contemplative, with still or slowly moving pictures surrounded by objects found in nature, Paik is much more theatrical and dynamic, using noisy and dazzling images.

Beginning tomorrow, the museum will introduce new arrivals, including “Video Chandelier” on its first floor, and will hold a special exhibition of artists inspired by Paik on the second floor. The new works will become part of the center’s permanent display, while the special exhibition will continue until May 9. 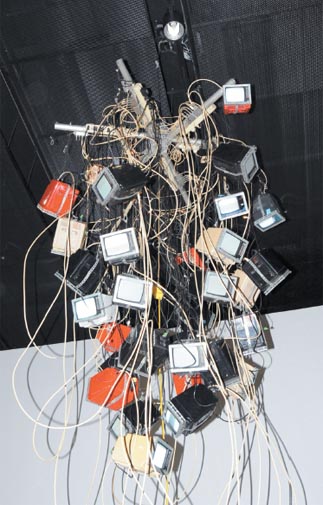 The special exhibition, titled “Random Access,” will feature various artists’ interpretations of six of Paik’s works and writings, including the interactive installation project “Random Access” (1967-68), the essay “Cybernetic Manifesto” (1966) and the video “Hand and Face” (1961).

“We have chosen these six works to let well-known and emerging contemporary artists find the social, political and aesthetic meanings of them,” the museum said in its statement.

The six pieces show Paik’s artistic sensibilities involved more than just the flickering, colorful piles of televisions for which he has become famous. Paik also embarked on completely different experiments.

For example, in the “Random Access” project, Paik let visitors compose their own electronic music by using a sound head detached from a tape recorder, which they could drag along strips of prerecorded audiotape tacked onto the wall. Paik had been considering the possibilities of combining music, performance and electronics since he met with the U.S. avant-garde composer John Cage in the late 1950s.


*The exhibit “The Pioneer of Korean Video Art Park Hyun-ki: A Retrospective” will continue until March 28 at the Gallery Hyundai in Samcheong-dong, central Seoul. Go to Anguk Station, line No. 3, exit 1. The gallery is open Tuesday through Sunday from 10 a.m. to 6 p.m. For more information, visit www.galleryhyundai.com.

The exhibit “Random Access” will start tomorrow and run though May 9 at the Nam June Paik Art Center. Take bus No. 5000 or 5005 from Euljiro 1-ga Station, line No. 2, to Yongin. The gallery is open Monday through Sunday 10 a.m. to 7 p.m. For more information, visit http://njp.kr/ie_eng.html.