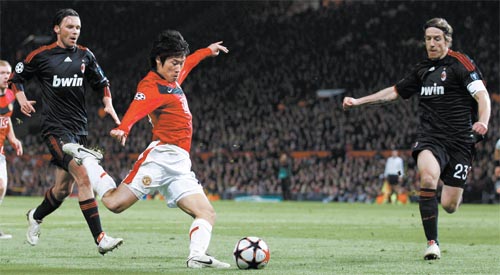 Manchester’s Park Ji-Sung shoots to score his side’s third goal during their Champions League round of 16, second leg match against Milan in Manchester, England, on March 10. [REUTERS/YONHAP]

Rooney, who scored twice in the 3-2 San Siro victory that put United in such a commanding position, weighed in with two more at Old Trafford as United swept into the Champions League quarterfinals to stay on course for a third successive final.

Park, who will line up for South Korea at the World Cup starting in June, scored the third with a rare goal after an hour - having briefly taken a break from his completely effective man-marking job on Andrea Pirlo - and Darren Fletcher put the icing on the cake with a late header.

“It always feels good to score, but it felt especially nice to score on home ground,” stated Park. “We won 4-0 but it was a tough match.”

Pleased with his team’s work, Ferguson credited Rooney and Park for their efforts in the game.

“It was a fantastic night for us,” he told reporters. “Wayne Rooney’s performance was just a continuation of his performances for the last two or three months, just sensational, unbelievable.

“The key tonight was Park and Rooney. Park played a game of sacrifice with discipline and intelligence that won us the game.”

Rooney opened the scoring with another powerful header after 13 minutes to swing the tie heavily United’s way, and Ferguson said his practice at that discipline had paid off.

“His movement in the box has improved this season, he’s practiced a lot more, he does heading sessions after training and I think you get your rewards,” he said.

The striker, upon whom England’s World Cup hopes rest, then showed lung-bursting ambition to be first to Nani’s cross a minute into the second, bringing lavish praise from Milan coach Leonardo.

“I think that Rooney is still young but he is a very complete player, he’s fast, strong and scores a lot of goals,” said the Brazilian. “He’s fast over short and long distances, he’s a very, very good player and is playing in a system that for him is perfect. On the counter-attack, he’s incredible.”

Leonardo said the damage in the tie had been done in the first leg and with his team suffering more injuries ahead of Wednesday’s game, it faced a virtually impossible task.

“It was always going to be hard after losing the first leg, and conceding a goal so early made our comeback even more difficult,” he said.

“But one thing we can’t deny is the powerful and strong performance United put in. We met a team who are in extremely good form.”

In other Champions League action, Real Madrid failed to qualify for the Champions League quarterfinals for the sixth straight season when Olympique Lyon dumped the Spaniards out 2-1 on aggregate on Wednesday.

Big-spending Real’s dream of winning a 10th European title at its Bernabeu stadium in May was shattered by Miralem Pjanic’s 75th-minute strike, which secured a 1-1 draw for visiting Lyon in the last 16-second leg after Cristiano Ronaldo’s goal in the sixth minute.

“You can say it’s a great achievement. We escaped the worst possible scenario in first half ... Hats off to the players who gave all they had tonight. We played a superb second half and I think we deserved it,” Lyon coach Claude Puel told TFI channel.

Real president Florentino Perez spent close to a quarter of a billion euros ($340 million) in the summer in a bid to end the club’s Champions League drought. Its latest failure raises fresh questions about the future of coach Manuel Pellegrini.