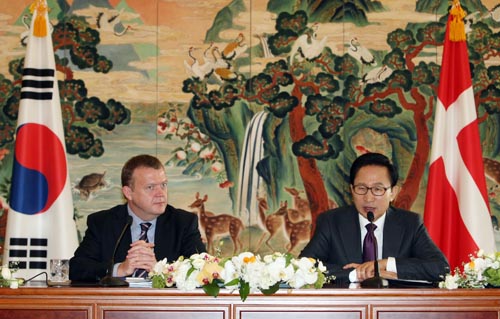 
Korea and Denmark agreed yesterday to expand cooperation to develop renewable energy technologies as part of green-growth efforts, South Korea’s presidential office said after a summit between the leaders.

President Lee Myung-bak and Prime Minister Lars Lokke Rasmussen also agreed to step up partnerships between their nations in helping countries in need, it added.

In the summit, Lee noted that South Korea and Denmark both pursue environmentally friendly and energy-efficient policies. “Prime Minister Rasmussen stressed the importance of cooperation between the two nations in the field and expressed hope that more projects will be jointly developed,” the Blue House said in a press release.

The Danish leader arrived in Seoul for a three-day stay on Wednesday, his first trip to South Korea. He is scheduled to visit the Demilitarized Zone, the heavily-armed border between the two Koreas, and the main science research complex in Daejeon, some 160 kilometers (100 miles) south of Seoul.

Lee and Rasmussen concurred that a planned free-trade agreement between Korea and the European Union will further boost trade and investment between Seoul and Copenhagen, according the presidential office.

“In addition, they agreed to strengthen cooperative ties in development aid as Korea joined the [Organation for Economic Cooperation and Development’s] Development Assistance Committee last year and Denmark is a leading country in the field,” the Blue House said.

The two sides will also make joint efforts to follow up on the political agreement reached at the global summit on climate change held in Copenhagen last December, it added.