Drill under way to remove WMDs

Drill under way to remove WMDs 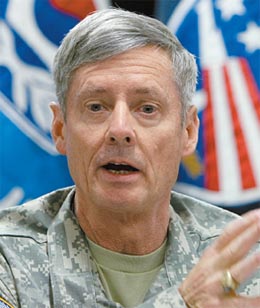 An American general has revealed for the first time that an American unit is running a joint military drill with South Korean forces to train for the elimination of weapons of mass destruction in case of an attack by North Korea.

Gen. Walter Sharp, the commander of U.S. Forces Korea, said yesterday that South Korean and U.S. troops have a shared responsibility for locating, securing and eliminating any weapons of mass destruction that threaten South Korea.

Sharp said that the U.S. Task Force Elimination unit under the 20th Support Command in Maryland is helping conduct the joint military exercises, and has done so in the past. The task force is conducting simulation training for both the Korean and American troops involved in the Key Resolve/Foal Eagle exercises.

“They are here for this exercise and if we ever went to war, they would naturally come also,” Sharp said. “They will also come here even after the transfer of wartime operational control from the U.S. to the South.”

The general made his comments during a press conference with reporters at the South Korea-U.S. Combined Forces Command in Yongsan Garrison, central Seoul, as the military exercises involving 18,000 U.S. and 20,000 Korean soldiers continued.

Sharp said the joint drill is meant to examine South Korea and U.S. preparedness if they had to go to war today.

The general had mentioned in an international conference last Oct. 30 that Seoul and Washington had agreed that the United States will take control of removing Pyongyang’s weapons of mass destruction and joint marine landing operations in case of an attack. But yesterday was the first time he identified the nature of the U.S. unit.

Sharp also said yesterday that the South and the United States are jointly examining ways to pinpoint the location of long-range artillery in the North that could destroy the South’s metropolitan areas in wartime.

“On a tactical level, we work very hard every day to make sure we are prepared to deal with the long-range artillery north of the demilitarized zone,” he said, adding that both countries are strengthening their training levels to cope with the North’s artillery this year.

North Korea has sharply protested the joint drills, but Sharp said the Key Resolve exercises are defensive and in keeping with military practice worldwide. He declined to detail the scenario for Key Resolve, but said, “What we are training for is all the threats that North Korea can throw at us.

“We watch very closely what North Korea is saying, doing and developing and we adjust our war plans based upon that,” he said. “We adjust our exercises based on how we think it would attack.”

Sharp also said that he does not agree with some U.S. experts’ opinions that the transfer of wartime control from the United States to the South should be delayed. He said he is confident the transition will proceed as scheduled in 2012.