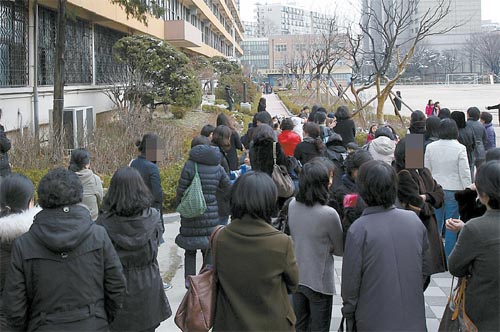 As a rape and murder case rattles the nation, parents yesterday wait outside an elementary school in Seoul to escort their children back home safely. [YONHAP]


The 13-year-old raped and murdered in Busan was still alive when police took the case public without proper strategy and preparation, the JoongAng Ilbo learned yesterday - and their missteps may have provided a motive for her killing.

An autopsy performed at the Institute of Forensic Medicine at Pusan National University showed that Lee Yu-ri probably died between March 2 and March 4, meaning that she was alive for more than a week after she was reported missing on Feb. 24 - and may have still been alive when police missed a chance to arrest the man now charged with her death.

And according to a prosecution source, “If the police had handled this case properly, the victim might have been saved.”

Police initially believed Lee was a runaway. They waited a day before beginning their search, and three before taking the case public and distributing the missing girl’s photos nationwide.

On March 1, Kim Kil-tae - who had phoned police on Feb. 25 to proclaim his innocence - was identified as the primary suspect and police began their search for him. Lee’s body was found in a water tank near her home five days later.

Exactly how long she had lain there is still being determined, but the prosecution source said the autopsy established the approximate time of death from her body temperature and an examination of her eyeballs.

The outcome of additional tests that use organs to determine the time of death will be available as early as today.

“When we put the two outcomes together, we will be able to pin down a date,” the source said.

But while the source said the forensic institute provided its findings to the Busan District Prosecutors’ Office and Busan Police, police said yesterday only that the doctor who performed the autopsy had been unable to determine an accurate time of death. The police said more information would be available next week.

“They are probably afraid of being criticized for their bungling,” the source said.

Prosecutors believe that Kim, who imprisoned and raped another victim for 10 days in 2001, probably kept Lee locked up and sexually assaulted her for days. Kim served eight years in prison for the 2001 assault.

Busan police initially treated Lee’s disappearance as a simple runaway case and did not open an investigation immediately, although foreign footprints were found at her home.

The search began the next day. About 4,500 policemen hunted for Lee in the neighborhood, and on Feb. 27 police distributed leaflets containing her picture nationwide in order to widen their search.

Other leaflets bearing photos of Kim, by then identified as a strong suspect, were publicly released on March 2.

As police continued their search for both Lee and Kim, detectives found a man sleeping in an empty house just 20 meters from Lee’s home on March 3. Police did not arrest the man, who is now believed to be Kim.

The incident falls within the window of time in which the murder may have been committed.

“When the police make an investigation public and openly pursue a suspect, it’s like a SWAT team going in during an anti-terrorist operation,” said Lee Soo-jung, a criminal psychology professor at Kyonggi University.

“But before you send out a SWAT team, you have consult with psychological experts to assess the suspect’s possible reactions and take steps to protect the victim.”

While Kim has a history of sexual assaults, he had never been charged with murder, the professor pointed out.

“In the past, Kim kept his female victim for days,” Lee said. “Before the police went public about the investigation this time, they should have meticulously planned for the victim’s safety.”

The police, however, said taking the case public was standard procedure after their search yielded nothing.

Busan police continued to interrogate Kim yesterday. He has reportedly persistently denied the accusations, even after police told him that his DNA had been found on Lee’s body.

Lee’s rape and murder has prompted politicians to urge the government to carry out executions of convicted rapists who have been sentenced to capital punishment.

“Death-row inmates who commit inhumane crimes such as serial murders and brutal sex crimes must be swiftly executed,” said Ahn Sang-soo, the Grand National Party’s floor leader, adding that the government and the ruling party will discuss the matter “in order to eradicate heinous child sex crimes.”

The last execution of death-row inmates was 12 years ago, when 57 were put to death at the end of the Kim Young-sam administration.