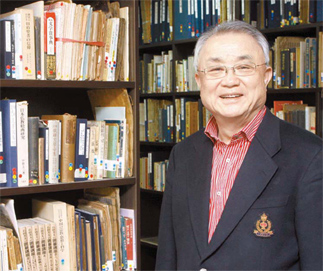 Yo Soon-ku, 74, the owner of Hwabong Gallery and Hwabong Mungo, has a collection of more than 100,000 books. By Choi Jeong-dong

Collecting books is a great joy for many people who love books, but there is one problem: moving.

It is a problem with which Yo Soon-ku, 74, is quite familiar. Yo is an avid book collector, with a collection of more than 100,000 books. When Yo’s collection got so big he couldn’t contain it, he had to sell two properties in Seoul.

Since then, he has found better ways to deal with his collecting habit. Now, he is the owner of Hwabong Gallery and of the bookstore known as Hwabong Mungo (Bookstore) as well as the director of the Hwabong Book Museum.

Yo began his career as an importer of foreign books. He launched the Seoul Book Fair in 1982, with a collection of more than 200 first edition books he had acquired from another collector. But when the books didn’t sell at the fair, he decided to sell them at auction, before a journalist he knew suggested that he open his own bookstore. He took his friend’s advice and opened Hwabong Mungo. 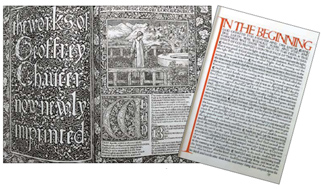 “The Works of Chaucer,” above, is one of the books in Yo Soon-ku’s collection, along with the “English Bible,” printed by Doves Press London.

“I was a young boy of literary interests,” Yo said. “I’ve been writing poems ever since I was a middle school student.”

Yo said he began collecting books because of his love for literature, but he fell into what he describes as a “black hole” of devotion.

Yo’s book business, which involved selling old books to purchase new ones, showed steady growth for 20 years but then started going downhill. So he tried a number of things to get the ball rolling again.

In 2004, Yo opened Hwabong Book Museum, but the number of visitors fell short of his expectations. To make up for the loss, he sold one of his properties and took over the Moran Gallery, which he reopened as the Hwabong Gallery in 2008. The gallery has a permanent collection that includes displays of both the world’s smallest and biggest books. And during the off-season, from January to February and from July to August, it holds a special book exhibition.

At Hwabong Mungo, the familiar smell of old books fills the entire store. Yo handed down his foreign book-collecting business to his son and now concentrates only on collecting rare and antique books. His collection includes copies of “The Pilgrim’s Progress” from all over the world, 500 different versions of “Chunhyangjeon,” a Korean folktale from the Joseon Dynasty, and old textbooks.

Yo also believes Korea should have a national museum dedicated to books. “I even met with the culture minister in 2006 and said that I would donate all of my books if a national book museum were established,” Yo said. “But he told me to donate my collection to the National Library of Korea.”

He decided not to take the minister’s advice because, he said, if the books were put into a library, they would become relics that no one ever sees.