SYDNEY - American writer Howard Frank Mosher says he can’t resist a good story and it was this that led him to his latest and 10th novel. Much of Mosher’s fiction takes place in the mid-20th century and in his home state of Vermont, such as “A Stranger In The Kingdom,” “Disappearance” and “Where the Rivers Flow North.”

His first book in three years, “Walking to Gatlinburg,” released this month, chronicles the nightmarish odyssey of 17-year-old Morgan Kinneson from northern Vermont to Tennessee during 1864 to look for his brother. Mosher, an award-winning writer known for his quirky characters, said it took him seven years to research and write this book, which is a couple of years more than previous books. He spoke to Reuters about writing and his latest novel:

Q. Why did it take so much longer to write Gatlinburg?

A. It started about 10 years ago when a friend told me a story about her great-great-grandfather, who had been conscripted into the Confederate Army as a 19-year-old, captured and sent to the infamous Elmira Prison in New York - also called Hellmira. He had a great name, Jasper Memory. He only had one item of value, a small gold button on his overcoat. In prison he asked a man who had been a dentist to fashion this into a ring for his fiancee. After the war was over, he walked from New York to the Smoky Mountains, about 1,000 miles, proposed and got married. You could not be a novelist and not want to write that story. 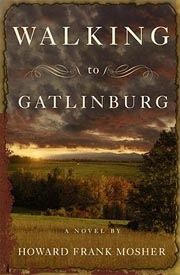 But there was a delay?

The more I thought about it I was certain someone else had written the book - Charles Frazier in “Cold Mountain.” I couldn’t duplicate that. But it kept revolving around in my head for a year or so. Then I was in northern-most Vermont, where Gatlinburg begins, walking to my house and I suddenly asked myself what if the character in my book was walking from Vermont to the Great Smoky Mountains looking for his brother who was missing in action and he has something of great value that some desperate psychopath wanted and was willing to kill him to acquire. That was about seven years ago and that was when the actually writing began.

Did your research take a lot of time?

I did something with this book that for me seemed counterintuitive. Instead of doing a lot of research on the Civil War and tracking his path, I spent the first year writing a rough draft to establish my story and character.

The rough draft was a complete work of madness that was over 1,000 pages long and I was probably the only person who could decipher it.

But then I was ready to do some in-depth reading and research. I wanted to fit the history and research into the story rather than shaping the story and characters to fit history. I am not really a historian, but I am a storyteller.

When did you know you were a writer?

Very early on when I was five or six. I grew up in an extended and Dickensian family. My grandparents didn’t have a penny but they had a 26-room farmhouse and in it lived a gallery of unusual relatives, cousins and aunts and uncles several times removed and tramps right off the road. My grandparents would take in anyone who needed a place to stay. None of them had any money but they all had stories and I have been writing stories since the age I could write.

Any advice for aspiring writers?

Read the classics carefully and continue to read widely. I think the old adage: “Read a thousand books and write one” is right.

Do you have a certain discipline when you write?

It is at least eight hours a day six or seven days a week and I am a tireless reviser. I know writers who seem to be able to get their books right the first time but I can’t do that and I will often have to write several drafts though before I come up with the main character. For me it is a process of discovery, a happy process but a long and hard one. Reuters