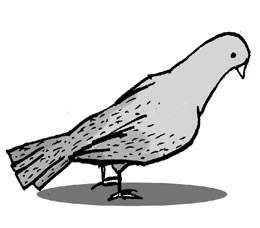 Doves probably became a symbol of peace because of “Noah’s Ark.” In the story, God is angered by what people have done to the world and sends a great flood to cover it in water, sparing only Noah and those aboard his ark. When the flood has passed, Noah sends out a dove, and it comes back with an olive leaf in its beak, a sign that the flood has finally ended.

Doves are, in fact, pigeons, which have been close to people since ancient times. They leave and come back, even when not trained to do so. The messenger bird system uses the pigeon’s instinct to return home. France’s AFP, the communication company established in 1835 and formerly known as Havas, once received news from Belgium and the United Kingdom through its “pigeon express.” In the East, carrier pigeons that relayed letters were used from the Spring and Autumn Period to the Warring States Period. Later, however, rapid urbanization caused many pigeons to become ill.

The poet Kim Kwang-sup found the destruction of nature and loss of humanity pitiable. “The pigeon that lost its address in the Seongbuk-dong mountain does not even have a garden where it can quietly sit and eat a bean,” he writes.

The term “pigeonist” once referred to a member of a moderate group opposing the hard-line Falconists. The terms once symbolized “pro-peace” and “pro-war,” respectively. There were also the “owlists,” who pursued both.

At a time when the nostalgia for smoke from nine-holed coal briquettes has disappeared, pigeons are no longer a sign of blessing, and have been tagged as “dangerous wild animals” subject to capture. They have even been given the nickname “pig-ens” because they grow fat from living off food they find in trash cans. They have truly become “birds that have lost the mountains, lost people, lost their significance as symbols of love and peace, and are hunted.”

Near Canada’s rivers and lakes, there are signs saying “Do not feed the wild ducks.” This is because tourists rush to the waters in the spring and feed fowl, depriving them of the chance to learn how to hunt for fish when they are young. In the winter, when the tourists stop coming, the ducks who have not learned how to survive on their own starve to death.

Perhaps people have done the same to pigeons, taking away their instincts with shallow pity and later neglecting them because we are tired of them.

There is a pigeon song in the “Siyonghyang music notes” of the Joseon Dynasty, which says, “Pigeons cry but I like cuckoos.” It is a part of the “Bulgokjo” songs written by Yejong of Goryeo. The pigeons in the phrase represent the servants who do not speak of the king’s misdeeds because they are afraid, and the cuckoos represent the servants who do.

Yejong only waited for cuckoos, but what about now? Are there only “pig-ens” left on the streets?