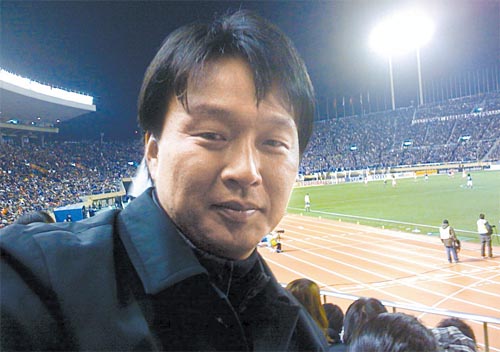 Lee Woo-young, a former national football team star, coaches at Japan’s Keio University and has a Ph.D. in sports psychology. By Kim Hyun-ki


TOKYO - In his playing days, Lee Woo-young was your typical star-crossed athlete.

Lee, however, has been more successful since he stopped playing the game, having led an underachieving Japanese university team to respectability. Lee has also received a Ph.D. in sports psychology.

At 186 centimeters (6-foot-1), Lee was one of Korea’s premier forwards at the regional qualification for the 1996 Atlanta Olympics. Playing under Ukrainian coach Anatoly Bishovets on the Olympic squad, Lee teamed up with striker Choi Yong-soo up front to provide the offense.

After graduating from Yonsei University in Seoul, Lee made his professional debut with Oita Trinata in Japan’s J-League. In 20 games over a season and a half, Lee netted 10 goals. When he joined the domestic K-League in 1998, Lee was the favorite to win Rookie of the Year honors.

But the injury bug struck with a vengeance. Lee only played two games in 1998 and was released by the Anyang LG Cheetahs club the following year. At age 26, when most athletes are entering their prime, Lee hung up his cleats.

Looking for a new career, Lee tried selling clothes at a market. But his passion for football still burned inside. In July 2001, Lee took a job as a high school coach in Sendai, Japan. He got his big break in 2003, when Keio University appointed him as coach.

Four years later, the school offered him the head coaching position. The school’s team was founded in 1927 and had never had a foreign head coach in its history. Even today, Lee remains the only foreign bench boss among 140 university teams in the Kanto region.

Some people in sports circles doubted that a foreigner could improve the program, and Lee was determined to prove them wrong.

The Keio team had no players on football scholarships - they were all walk-on student-athletes who arrived at Keio by getting good grades in the competitive entrance exam. So it wasn’t a surprise that the team toiled in the second-tier league for years.

But Lee worked his magic, guiding the team to the league title in the second division and earning the promotion to the first division in just two years. Keio has stayed competitive in the top flight league, too, and the school even upset its rival Waseda 3-0 in their annual clash last year.

When he wasn’t busy leading this overachieving bunch, Lee was pouring his energy into academics. His hard work bore fruit this week when he received his Ph.D. in sports psychology at Nippon Sport Science University after submitting a thesis on the efficiency of cognitive training in football.

Two former Korean national team players, Choi Chul-soon and Lee Yong-soo, have received Ph.D.s and are now teaching as university professors in Korea. Lee Woo-young, however, is the first ex-national team star to get his doctorate while coaching.

“The difference stems from Korea’s tendency to try to produce winners as compared to the Japanese inclination to focus more on nurturing talent,” Lee said.

Having gone from a star-crossed prospect to a successful coach, Lee isn’t about to stop. In fact, he has already set his sights on the next goal: becoming a head coach in Korea.

Lee said he wants to apply his coaching experience and academic knowledge to contribute to Korean football.