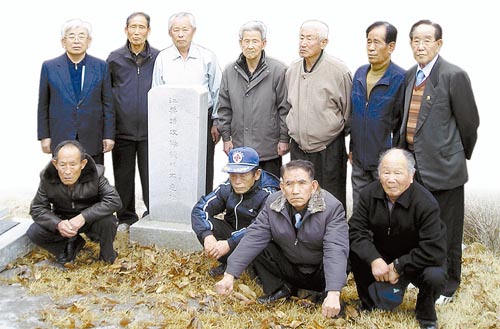 Earlier this month, 11 gray-haired men climbed halfway up a mountain in Incheon until they approached a memorial stone with chipped corners, where they all kneeled to the ground.

Etched on the back of the stone were the names of 22 fighters who died while defending Ganghwa Island, off the western coast of South Korea, during the Korean War (1950-53).

The men who made the trek belong to the Ganghwa Special Forces Veterans Association, which is composed of men who risked their lives to defend the island even though they weren’t officially part of the country’s military. While some people say their actions during the war were honorable, the government claims they killed civilians.

“Even though these dead men protected our hometown by battling with North Korea, the South’s government said they slaughtered innocent people. It is so absurd,” said Lee Kye-yong, 86, head of the association. “We came to pay tribute so that these men did not die in vain.”

Before they climbed up the mountain, the men joined other association members at a restaurant for a regular meeting. Each member agreed to file two petitions - one with Incheon’s mayor and another with Ganghwa County’s governor - requesting that the government correct its official version of events and establish a new memorial honoring the men who died.

They also decided to send another petition to the South Korean government-endorsed Truth and Reconciliation Commission to ask for the release of documents finalized on July 17, 2008, that conclude some 430 Ganghwa fighters massacred civilians.

The Ganghwa unit organized to defend the area was created on Dec. 18, 1950, when the South Korean military was falling back as Chinese armed forces entered the war in support of North Korea. The Turkish military, serving as part of the United Nations forces, and police who were guarding the island had no choice but to retreat. Two dozen young residents, however, decided to stay and defend their town.

The men armed themselves with guns that the police left behind. They engaged in 10 battles with the communist troops before the group dissolved on March 16, 1951.

Even though South Korea’s front line fell back to Pyeongtaek and Anseong in Gyeonggi Province in January 1951, the North’s military had trouble crossing the island due to the resistance.

The first battle took place at the island’s Dolmeoru dock on Jan. 8. Members of the Ganghwa unit hid at the dock after learning that some 380 communist party officials planned to reach the island by ship from the North. When the ship approached, the unit attacked, killing 91 people and capturing the rest alive.

The Ganghwa unit engaged in its most intense battle on Jan. 18. of the same year, when it fought with the North’s military that came down from Gimpo, Gyeonggi. The Ganghwa group lost 17 members in the battle and retreated. But the unit regrouped and was able to reclaim the island on Jan. 30.

In order to honor their accomplishments, Ganghwa County set up the memorial stone in 1952. However, the Ganghwa Culture Center published a history book about the island in 2003 that contained claims that the men massacred innocent people.

Since 2007, living members of the group have been visiting the truth commission as part of their own fact-finding mission.

“We don’t want any medals,” said Choi Jung-seok, a surviving member of the unit. “We just want people to know that we defended the island at all costs and did not kill civilians.”