Rescue worker stands tall in the face of disaster

Rescue worker stands tall in the face of disaster 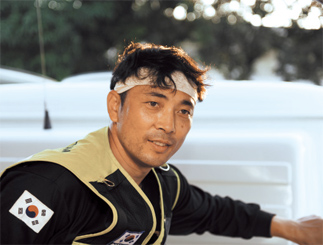 He’s now ready to ship off to Chile, another country recently hit by an earthquake, if called upon.

“I will take advantage of my experience in Haiti to perform my rescue duties better if I am dispatched to Chile,” Choi said.

The 42-year-old said some of the images from Haiti are still seared in his mind. He recalled that dead bodies were all over the place when he arrived in the country.

“I was not able to get a good night’s sleep for several days after I returned to Korea because I couldn’t forget the smell and sight of those dead bodies,” Cho said.

“Debris of collapsed buildings was piled on the ground everywhere you looked for about 12 kilometers [7 miles],” he said. “Since most buildings in Haiti are constructed with steel wire rather than steel bars, only one out of every 100 buildings or so was still standing. Even with rescue dogs and sensors, we weren’t able to find survivors, but we recovered 32 dead bodies.”

He recalled that a 30-year-old Haitian man said his family members were stuck under a collapsed university dormitory. Choi and other rescue members drilled some 20 meters (65 feet) into the wreckage right away. But they didn’t find anyone.

“The man grabbed our arms and burst into tears. He begged us not to leave and to keep looking for his family,” Choi said.

The weather in Haiti was so hot and humid that each rescue member had to drink more than 10 bottles of water a day.

“There was one scene where a soldier from the United States was distributing relief to local victims who were in a line stretching over 400 meters,” Choi said.

In response to some media reports that Korean rescue members lived in difficult conditions in Haiti while Korean embassy workers stayed in air-conditioned rooms and slept on mattresses, Choi said the embassy was actually very helpful and supportive.

“I just don’t know why such groundless reports were released,” he said.