Get on the mat for martial arts training

Get on the mat for martial arts training 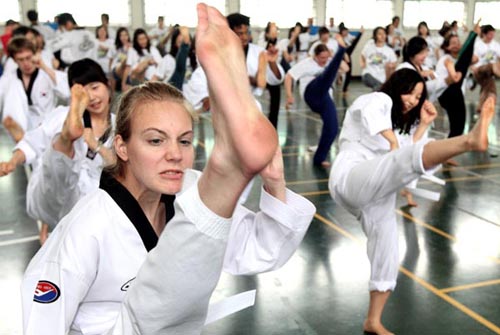 Students practice taekwondo at a class in Seoul. The growing popularity of this and other martial arts in Seoul has led gyms to offer more classes geared toward foreign students.[JoongAng Ilbo]

Part exercise, part philosophy, studying martial arts is a great way to feed both the body and mind. Some students of martial arts may consider it a physical sport, while others consider it an art or spiritual exercise. Although there are many forms of martial arts with origins in all areas of the world, martial arts can generally be categorized in two groups, in reference to the major actions they emphasize: striking or grappling. “Striking” martial arts are typically those that focus on striking and kicking movements, such as taekwondo or muay Thai. “Grappling” martial arts focus on throwing, pinning and holding, such as hapkido or Brazilian jiu-jitsu.

How do you know which one is for you? The first step is to decide if you’re more interested in striking or grappling techniques. If you’re interested in both forms and incorporating them as a full contact sport, mixed martial arts may also be another interesting option. Below is a brief introduction to the aforementioned styles of martial arts and places in and around Seoul where you can study them.

In terms of the number of practitioners, taekwondo is the most popular martial art in the world. The Korean Ministry of Culture, Sports and Tourism reports that taekwondo is currently being practiced by 70 million people in 190 countries. In Korea, where it is a national sport, everyone has learned at least a little during elementary and middle school PE classes. Taekwondo is also one of only two martial arts in the Olympics. It was first introduced as a demonstration sport during the 1988 Olympics in Seoul and later became a full medal event at the 2000 Olympics in Sydney.

There are two major taekwondo federations, the World Taekwondo Federation and the International Taekwon-Do Federation. These two monikers are often used to describe the two main methods of taekwondo, which differ slightly based on the focus of the training. The most common is WTF, the form recognized by the Olympics. WTF is also closely associated with Kukkikwon, the governing taekwondo organization set up by the Korean government. WTF training methods typically focus on speed and sparring. The second style is taught by ITF dojang, or gyms, and concentrates mostly on power and self-defense. Below are two taekwondo dojang. Each dojang specializes in one of the two taekwondo styles and both offer classes specifically for expats.

Jin Sang-eun, the founder of Arirang Taekwondo Club, started studying hapkido in elementary school and taekwondo in high school. He continued to practice taekwondo all through his days at university. He was inspired to open a taekwondo dojang after meeting a lot of foreigners who wanted to learn taekwondo but couldn’t find an appropriate place to study, because the masters were unable to speak English or because the students in their classes were children.

There are currently about 60-70 students who train at Arirang regularly, and the classes are comprised of both Korean and expat students. Jin lists three main goals of the Arirang Taekwondo Club: “The goal of our club is to make Korean taekwondo popular among adult students. We also want to provide a step-by-step program that’s accessible to foreigners. Finally, we hope that our members, both Korean and foreign, will work together and become friends through training and taekwondo.”

While Arirang currently offers taekwondo and hapkido, Jin emphasized that the educational environment of the gym, which also has classes for members who want to help train students in other martial arts disciplines.

“We’re open to other martial arts so that members also have a chance to share their skills,” Jin said.

Classes cover a range of exercises including “poomsae,” or taekwondo patterns and sparring. Classes are held on Tuesdays and Thursdays from 8 p.m. to 10 p.m. and on Saturdays and Sundays from 2 p.m. to 5:30 p.m. Monthly membership is 70,000 won ($62.03) for beginners and 50,000 won for intermediate or advanced students.

Arirang Taekwondo Club is located near Samgakji Station (line No. 4 or 6, exit 12). For more information, visit http://cafe.daum.net/arirangtaekwon, call 010-3078-1433 or send an e-mail message to tm3ym@hotmail.com.

The Way opened only a month ago in Itaewon but has already gained a following. The academy offers classes in both Korean and English and Master Kim Hun and is considered “one of the top instructors in the country.”

Anna Desmarais, director and assistant instructor at the academy, credits their quickly growing membership in part to Master Kim’s stellar reputation and the diverse kind of instruction they offer.

Because the classes are offered in two languages, the student body is an equal mix of both expat and Korean students. For students who are interested in studying a variety of martial arts disciplines, The Way also offers muay Thai, Brazilian jiu-jitsu and mixed martial arts, in addition to yoga. For newcomers to martial arts, it may be beneficial to study a few different methods before settling on one that suits you the best.

Muay Thai has been around since the 11th century and began initially as a part of military training. It is the national sport of Thailand and can be seen as a mix between martial arts and kickboxing. Muay Thai is similar to taekwondo in that it is considered a “striking” martial art, but is considered a much more full-contact sport. Whereas taekwondo uses poomsae, or patterns that use kicking and punching the air or sparring, which involves hand to hand combat with pads, muay Thai fighters use gloves similar to boxing gloves and combatants exchange blows. Muay Thai is often referred to as the “Art of Eight Limbs” because of the additional use of elbows and knees in its main movements. Whereas boxing uses two points of contact (fists), and taekwondo uses four points of contact (fists and feet), muay Thai moves use eight point of contact (fists, feet, elbows and knees).

For students who are interested in studying muay Thai in Seoul, as mentioned before, The Way Martial Arts Academy offers classes. In addition, there is a chain of gyms called Tae Woong offering classes as well.

First started by Kong Sun-taek in 1998, Tae Woong has several locations around the city open to anyone interested in studying this dynamic sport. Some of the locations include Sillim, Noksapyeong, Sinsa-dong, Dunchon-dong, Bulgwang-dong, Ansan, Wongju and Busan.

Kong, who has studied hapkido, taekwondo and Western boxing styles, has become a true driving force behind the growing popularity of muay Thai in Korea. One of the gym’s instructors, Belinda Caldwell, was Korea’s 2008-09 Amateur Champion. Caldwell, who is originally from Australia, helps teach muay Thai for expats who are interested in learning the sport.

Each location has different schedules and fees, so check the Web site for more information at www.twmt.webs.com (English) or call 010-7133-9915.

Hapkido is a Korean martial art that focuses more on grappling and locks than on strikes and kicks. It is considered an eclectic martial art, as it incorporates characteristics of several other martial arts disciplines. Hapkido can sometimes be combined with weapons such as swords, ropes, nunchaku, canes, sticks and staffs. One interesting aspect of hapkido is its emphasis on striking opponents at pressure points and using throws and locks to force your opponent to submit. As with ssireum, or traditional Korean wrestling, footwork and gaining leverage with body positioning is an important element of hapkido.

For expats interested in learning hapkido, the aforementioned Arirang Taekwondo Club offers hapkido courses. In addition, there are a couple of dojang that were established specifically to train foreigners.

Sangmukwan is located near Sinjeongnegeori Station on line No. 2 and offers various programs for international students to learn this sometimes overlooked Korean martial art. For more information on schedules and fees, visit http://www.sangmookwan.com/index.php.

TMAS offers a course that incorporates a blend of hapkido, taekwondo, judo and yongmoodo, as well as martial arts weapons techniques. The classes are conducted in English and typically last for two hours, though students can come before and after to practice and train. Master Kim Nam-su graduated from Korea’s famous martial arts university and boasts black belts in five different martial arts disciplines. The gym also offers yoga classes. The schedules and fees vary so check their Web site, http://t-m-a-s.com, for more information.

Brazilian jiu-jitsu is a grappling martial art built on the principles of body locks, choke holds, and ground fighting. BJJ is a high-contact martial art that also focuses on the usage of body positioning to create leverage against your opponent. BJJ emphasizes through its moves that smaller, weaker players may still take control over their larger, stronger opponents by utilizing proper positioning and maneuvering. BJJ is actually derived from the Japanese martial art judo, but came to Brazil during the 1910s and has since evolved to its current incarnation. BJJ is becoming more and more popular in Korea and a large number of gyms are popping up all around the country.

The first BJJ academy in Korea, this gym opened in 1999 under Master Lee Hee-sung. Located between Ahyeon and Ewha Womans University Stations (both on line No. 2), the gym offers a large range of classes. A new branch of the same academy has opened this year in Gangnam, near Gangnam Station, line No. 2, exit 2. For more information, please check their Web site: http://bjj.co.kr.