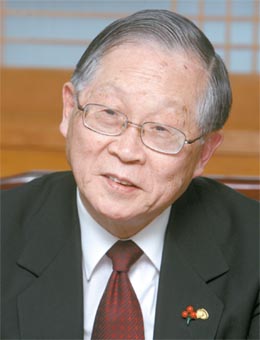 Koreans have won Olympic gold medals and membership in the club of developed nations - but one award no Korean has yet claimed in a Nobel prize in science.

The National Research Foundation of Korea, formed by researchers from the Korea Science Foundation, the Korea Arts and Science Promotion Foundation and the International Technical Science Cooperation, is the first organization to take on this challenge.

The JoongAng Ilbo met with the head of the foundation, Park Chan-mo. After studying at Seoul National University and the University of Maryland, Park taught at the Pohang University of Science and Technology and elsewhere. He has written 160 papers but is also known as a successful manager, since he has served as the president of Postech and various other organizations.

Q. What must Korea do to receive the Nobel prize in a science category?

A. Right now, [Korea’s] engineering is recognized on an international level, but the competitiveness of its basic sciences is lagging.

If the Korean government doesn’t support the basic foundations of science then all hope may be lost. Since World War II, Japan has received 13 Nobel prizes because it attached great importance not only to engineering but also to the basic sciences category. It might be too late for Korea, but since the country is now more aware of the importance of basic science, there is a greater chance of being awarded the Nobel prize.

What is the National Research Foundation of Korea’s mission, exactly?

Science is all about creativity and challenges, so “high-risk high-yield” research should be pursued. That’s why the NRFK has introduced a program to accept failure in research. In the past, no matter how diligent or hardworking you were, if you failed at what you were doing, then you would basically have to give up on your career since no one would support you from that point on. That needs to change. In the world of science, those who face many failures have a higher chance of success, ultimately. Research that’s always successful isn’t real, valid research, and this notion of repetitive success is seen as abnormal in our field.

You mentioned that Koreans need to be more supportive of science. Aren’t scientists already acknowledged publicly?

Last April, on Science Day, the president participated in an event where he asked 10 children what they wanted to be when they grew up. There was only one who wanted to be a scientist.

The rest of them wanted to be athletes or celebrities. So obviously, there need to be more role models in science, just like Kim Yu-na in the sports world. I had been looking forward to Professor Hwang Woo-suk becoming that person, but that ended as a failure. Well, I think the government is partially responsible for that scandal, as it did not let him focus quietly on research with enough time.

I have heard that you are very interested in North Korean sciences.

Since they’re good at English, Korean and Chinese and computers, the graduates are highly sought after. After North Korea found out about this, they asked us to help build a university like Postech or Kaist. Kim Il Sung University and the Kim Chaek University of Technology are known for their basic science theory and mathematics.