Nirvana not found in a shiny crystal

Nirvana not found in a shiny crystal 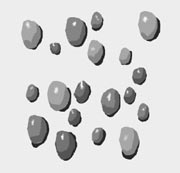 The Korean word sari, meaning the small crystals sometimes found among the cremated remains of monks, is derived from the Sanskrit word for “body,” sharira.

The “Golden Light Sutra” explains in the words of the Buddha, “Sari is a rare thing, because it comes from the attainment of nirvana.”

Some people believe that when a renowned monk passes away, more sari is found among his ashes than in the remains of lesser monks.

Over the centuries, as Buddhism spread across Asia, certain mythological powers were attributed to sari.

The 16th-century medical encyclopedia “Bencao Gangmu” written by Li Shizhen in the Ming Dynasty (1368–1644) explained that sari can only be broken apart using the horns of antelopes.

The scholar Yi Kyu-gyong also said that because sari is created as a result of extreme yin energy, or the Chinese principle of feminine passivity, sari will melt when touched by rhino horns, the material of masculine active yang energy. Of course, some have tried to exploit the purported power of sari over the years.

A wicked monk named Hyoga appears in the history book of the Goryeo Dynasty (918-1392).

He tricked people into believing that honey water mixed with rice flour was actually sari that came from his body during enlightenment. He was sentenced to a severe punishment for his trespasses in 1313.

In addition, Yi Ik, a prominent scholar in the 18th century, criticized monks for pretending to discover sari in the remains of the dead.

He said that sari was rarely found in the past, but now it is very common for monks to find it and then build towers around the sari to encourage pilgrimages to their temples. Yi Ik even said that some monks brought lawsuits against each other so they could find out whether the sari in the towers were genuine or forgeries.

Scientists today claim that sari is merely a result of the body’s disintegration during the cremation process, not anything related to Buddhist enlightenment. A study published in a 1995 edition of a journal of legal medicine found that crystal-like substances can be formed when burning a human thighbone at a temperature of more than 1,400 degrees Celsius (2,552 F).

Of course, the faith of Buddhists in the words of the Buddha has meant that sari still plays an important role among the faithful. Millions of pilgrims travel across Asia to see the sari towers and shrines each year.

The late Venerable Beopjeong entered into nirvana last Thursday, and his body was cremated last Saturday.

We must remember the monk’s dying wish:“Do not try to find crystals nor build a tower.”

His words scold us for being focused on material treasures like sari that distract us from our spiritual obligations to our faith.