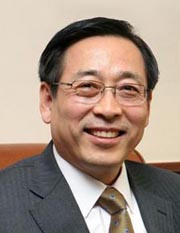 Korea has recovered from the global economic crisis at a relatively rapid clip, ranking as one of the only members of the Organization for Economic Cooperation and Development to post growth last year.

But Kim Tae-joon, president of the Korea Institute of Finance, thinks the country needs to take “baby steps” when it comes to raising its benchmark interest rate to stabilize the economy and offset inflation.

The danger of moving too fast? Another downturn.

“Korea handled the global financial crisis pretty well through rate reductions, but we still have a long way to go in order to normalize the economy,” Kim said in an interview with the JoongAng Daily earlier this month.

During the interview, Kim offered his views on a range of topics related to the recovery.

Many countries - including Korea - are walking a tightrope as they determine when to raise interest rates and scale back policies that helped prop up their economies during the downturn.

Kim said Korea should sit on the sidelines until some of the world’s larger countries move forward with strategies to unwind these policies.

Several smaller countries are already starting to move in this direction, as is global giant China, albeit slowly. But the world’s major economic powers have yet to fully implement such strategies.

“The risks from belatedly taking action in this area are relatively lower than the risks of taking action amid the current uncertainties” revolving around the health of the global economy.

The KIF president said Korea should wait a little bit longer to launch its exit strategies, including a rate hike, until these uncertainties are cleared up.

Regarding the level of a rate hike, Kim said it should depend on a variety of factors.

“The country should raise its rate based on the economic conditions that it faces at the time,” he said.

“If the country decides to raise its rate, taking baby steps is a must. For example, the rate should start to be raised by 0.25 percentage points.”

Kim gives high marks to the Lee Myung-bak administration - in office for just over two years - on the economic front.

“I highly value the president’s leadership during the recent global financial crisis,” Kim said, citing Lee’s strategic move to hold emergency economic meetings once a week since the crisis materialized in late 2008.

“A foreigner I spoke with when the country was suffering amid the global economic turmoil told me that Korea would ride out the crisis very well, as its president used to be a chief executive officer and has economics-related knowledge,” Kim said. “I guess he was right.”

Along with the Lee administration’s moves to blunt the effects of the economic meltdown, Kim praised the overall public for maintaining their calm throughout the downturn.

He added that Koreans have previous experience with severe downturns such as the Asian financial crisis in the late 1990s.

For the country to live up to its potential going forward, Kim underscored the need to raise productivity.

“If we consider Korea at [a base point of] 100 on a scale of labor productivity, the United States and Japan stand at 190 and 140, respectively,” he said. “Therefore, we need to put our utmost efforts into raising labor productivity, particularly because our society is aging rapidly.”