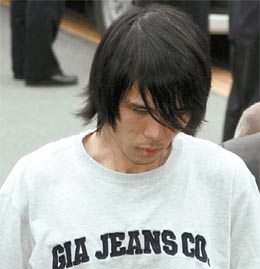 The primary suspect in the vicious rape and murder of a 13-year-old Busan girl yesterday admitted to police that he woke up beside her dead, naked body after a drunken black-out.

It was the first time that Kim Kil-tae had admitted any involvement in the vicious kidnapping, rape and murder of Lee Yu-ri.

After a day of interrogation that included lie-detector and brainwave tests, as well as a psychological profiler, 33-year-old Kim, who throughout the day had adamantly denied killing Lee, broke down at around 3:15 p.m.

According to police, Kim said that he had gotten drunk on the day of Feb. 24, and when he came to he found himself in an empty house with a dead, naked girl beside him. Police said he used cords to tie her up inside a bag, wrapped her clothing in a plastic bag, then hid the corpse in a water tank, covering the body with lime. Kim told police he then ran away.

Police last night were still investigating details - including Kim’s motive - but no further details were available as of press time last night.

Kim Cheol-kwon, 50, a psychiatrist at the Dong-A University Medical Center in Busan, who was invited by police to sit in on the interrogations for an hour, said that when he talked to him, Kim gave, “no sign of regret. He talked in a calm tone, as if he were telling another person’s story. It was like he has a heart of ice.”

Police at one point had even been prepared to bring in Kim’s adoptive mother, whom he had been flatly refusing to see, to force a confession.

Lee went missing on Feb. 24 and the police made the search for her public on Feb. 27. Kim was quickly identified as a prime subject and an open pursuit for him began on March 2. Lee’s body, naked and covered in lime, was not far from her home four days later. Traces of Kim’s DNA were found on her body, and he was arrested on March 10 near a market in Busan.

With Kim’s confession, police will be able to file their investigative report to prosecutors, who will decide whether to indict him and on what charges. He will continue to be detained.

Meanwhile, a survey released yesterday by Youido Institute, a Grand National Party think tank, found that more than 80 percent of Korean people are in favor of capital punishment as it relates to this case. Of 3,049 adults nationwide, 83.1 percent backed the death penalty while 11.1 percent opposed.