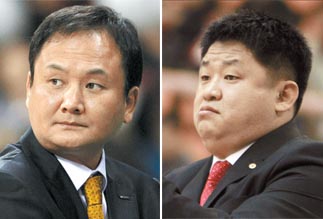 Two former floor generals on the hardcourt who are widely considered among the best point guards in the history of Korean basketball will square off as head coaches in the semifinals of the Korean Basketball League.

The best-of-five-games series tips off at 3 p.m. on March 20 in Ulsan.

The series features a proven head coach - Yoo - taking on a rookie counterpart.

While Yoo was respected for his savvy play and leadership abilities in guiding his teammates with quick and accurate passes during his playing days, Kang was known more for his flashy dribbling style and the ability to sniff out open teammates.

The interest in the clash between former greats is already creating a lot of buzz around the league and among basketball fans. While the evaluation of the two as players is fairly even, Yoo is far ahead of his peer as a head coach. Respected as a master tactician, Yoo has become one of the most respected head coaches in the league, having coached his team to the best regular season record in four of the past five seasons.

Kang, on the other hand, is in his first season as head coach of a KBL team. Entering his first playoffs, Kang’s team defied many experts who predicted LG would win the first-round series.

“Kang has done well in the regular season but has also put a lot of preparation into the playoffs. Dongbu’s bench outplayed LG’s, and that was the determining factor in the series,” Yoo said. “Having said that, we are ready and our players are confident.”

Kang said he has a lot of respect for the opposing coach. “I remember seeing Yoo in action as a high school player, and it left a lasting impression,” Kang said. “Mobis is a strong team, but we are not afraid.”

Aside from the coaching matchup, Dongbu’s Kim Joo-sung - a two-time league MVP who is widely considered the best domestic center - and Mobis’ Ham Ji-hoon, the 2010 MVP and a young center on the cusp of stardom, will also make for interesting story lines in the series.