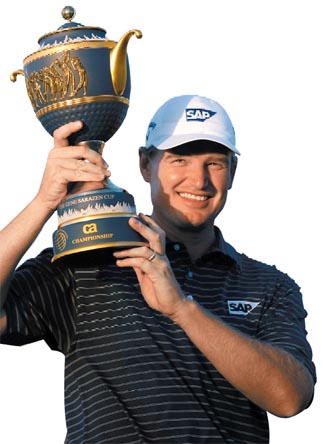 South Africa’s Ernie Els holds the trophy as he celebrates his win in the CA Championship at TPC Doral in Miami, Florida on March 14.[REUTERS/YONHAP]

DORAL, Fla. - They call him the Big Easy because of a graceful swing that looks as if it requires so little effort. But Ernie Els worked harder than ever Sunday to win the CA Championship.

Two years without a victory - the longest drought of his career - and playing with all the pressure against a South African protege whom he helped groom for such a stage, Els played the final 23 holes without a bogey on the Blue Monster and closed with a 6-under 66 for a four-shot victory over Charl Schwartzel.

Els looked every bit like his nickname as he sauntered toward the 18th green, raising his cap to the crowd with an easy smile. It was as much relief as it was satisfaction.

He returned to the elite tier in golf at No. 8 in the world and became only the fifth player to win multiple times in the World Golf Championships, joining Tiger Woods, Darren Clarke, Geoff Ogilvy and Phil Mickelson.

Els worked on his swing until twilight in the days leading up to Doral, then put it to the test in a final round that was far closer than the margin suggested. Schwartzel, a 25-year-old who took part in Els’ junior program in South Africa, never backed down.

“This means so much,” Els said. “I didn’t think it was ever going to happen again. But I felt all week that the work that I did, that I finally had to trust it at some stage, and there’s no better day to really test yourself.”

Mike Weir of Bright’s Grove, Ontario in Canada fired a final-round 70 to finish 14 shots back.

Els was clinging to a one-shot lead when he stood over a 25-foot par putt on the 14th hole, relieved to see it fall on the final turn. It was the pivotal moment in the tournament, the kind that Els had been missing since his victory two years ago in the Honda Classic.

“I haven’t been making those kind of putts, and you have to make putts like that to win golf tournaments at some point,” Els said. “Luckily for me, I did it on the 14th hole today. And absolutely, I felt a lot better after that. I felt like maybe this one is for me this week.”

Schwartzel, a houseguest of Els the last two weeks, caught a bad break on the 15th hole when his ball plugged in a front bunker, and he knocked that into a back bunker on his way to a crucial bogey. He missed short putts on the next two holes and closed with a 70.

“All credit to Ernie. He played flawless golf today,” said Schwartzel, who earned $850,000 and will be able to take up PGA Tour membership next year. “I thought I played really good, gave a good charge. I was on his heels all the time.” It was a strong effort by Schwartzel, who has considered Els a hero since he first started playing golf.

Despite two bogeys on the final four holes, he was the only player to give Els a run. And he was poised to take him down until his tee shot left him little hope in the sand.

“I plugged and that was a killer,” Schwartzel said. “For me, it’s been the biggest stage I’ve had. This is a good day for me.”

Padraig Harrington fell out of the competition with three straight bogeys on the back nine, closing with a 72 to tie for third at 11-under 277 along with Matt Kuchar (68) and Martin Kaymer of Germany, who had a 69 and moved up to No. 7 in the world.

Alistair Presnell of Australia matched the best round of the day with a 64 and tied for sixth. Defending champion Phil Mickelson, who was never in the mix, shot a 68 and tied for 14th.

Els could not have imagined being in the final group at Doral with Schwartzel, and to see the two South Africans standing on the first tee under warm sunshine, it was easy to see what he meant.

To think that Schwartzel was 2 years old when his father and Els won a club tournament together, or that he was among the gangly teens who travelled with the Ernie Els & Fancourt Foundation junior team. More recently, Els invited Schwartzel to stay in his south Florida home while Schwartzel was passing time between two WGC events.

And they stayed together for so much of the final round, trading birdies and keeping their names atop the leaderboard.

Els made birdie from the bunker on the opening hole. Schwartzel answered with a 25-foot birdie on the second. Els followed with two straight birdies, the most impressive on the 223-yard fourth with a shot into eight feet despite a vicious right-to-left wind. Schwartzel fell three shots behind with a bogey from the bunker on No. 5, only to birdie his next three holes.

No one else joined the chase.

Els suddenly has good vibes as he begins his road to the Masters, the one major that has haunted him throughout his career. His victory was worth $1.4 million, and moved him past Colin Montgomerie and atop the PGA European Tour career money list with about $33.6 million.

Next up is his charity event Monday to raise money for autism, a major cause for Els since learning his son, Ben, is autistic. Ben is 7 years old, and Els says he is a few years away from appreciating what his father accomplished Sunday.

“We’ll show him the tape,” Els said. “I think he’ll get excited about it.”