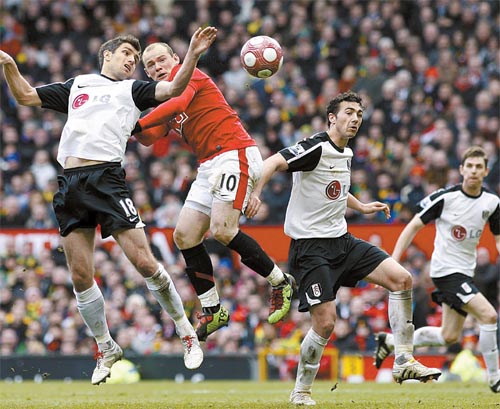 
LONDON - Wayne Rooney scored his 31st and 32nd goals of the season to lead Manchester United to a 3-0 home win over Fulham that nosed the champions back in front in the Premier League title race.

United officials buried a time capsule near the tunnel before Sunday’s kickoff to mark 100 years at Old Trafford, and Rooney etched his name ever deeper into the club’s fabric with another unstoppable display.

At this rate the England striker could well surpass the 42 goals scored by Cristiano Ronaldo in the 2007-08 season.

On a day when United labored to answer the victories for Chelsea and Arsenal that had dropped them down to third, Rooney provided the spark with a display that illustrated why England’s World Cup hopes rest so heavily on his shoulders.

His instinctive first goal, 30 seconds into the second half, punctured Fulham’s resistance and his second with six minutes remaining settled some jitters against a dogged London side for whom Bobby Zamora fluffed two great chances.

To cap his afternoon Rooney’s raking diagonal pass then instigated a move that ended with Dimitar Berbatov adding a third goal in the final minute as United, bidding for a fourth consecutive title, moved to 66 points with eight games remaining, two points ahead of Chelsea and Arsenal.

Surprisingly, Rooney hardly got a kick during the opening 20 minutes as Fulham stifled the home side, although he did burst to life with a snap shot that was saved by Mark Schwarzer.

Fulham, beaten in the Europa League by Juventus on Thursday, could have taken the lead when striker Bobby Zamora left United’s central defensive duo of Rio Ferdinand and Nemanja Vidic for dead, but his attempted lob cleared the crossbar.

A frustrated Rooney went off at halftime complaining about a penalty that was not awarded. But he lifted the mood straight after the restart when he found space in a congested area to beat Schwarzer with a side-foot finish.

Zamora wasted another chance when he delayed too long when clean through, allowing Vidic to make a block.

Shortly afterward, Rooney sealed the points with a sweeping right-foot finish after great wing play by Berbatov. Berbatov then headed in a Park Ji-sung cross to reach double figures for the season. The assist was Park’s first of the season.