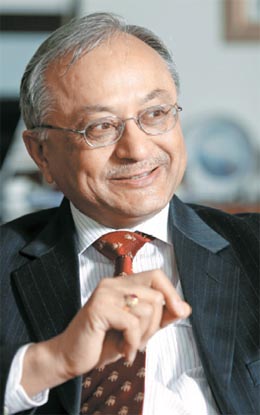 The leaders of 20 of the world’s leading and emerging economies should discuss ways to successfully deal with inflation prompted by budget deficits and to fight international trade barriers at the upcoming Group of 20 summits this year, India’s top envoy to Seoul said.

In his recent interview with the JoongAng Daily, Indian Ambassador to Korea Skand R. Tayal said he was optimistic about the role of the G-20 in resolving the global economic crisis.

“In the last G-20 Summit, two major decisions were achieved. The leaders said there should be good financial stimulus packages by all member countries, more liquidity in the system both nationally and internationally,” he said. “Every member country also agreed that there should be no protectionism.”

Tayal said the stimulus measures, however, increased budgetary deficits in many countries and concerns grew about subsequent inflation.

“Earlier in India, inflation was about 4 to 5 percent, but it has grown to 8 to 9 percent,” he said. “We have to take steps to control liquidity, but we are not yet in a position to talk about an exit strategy.”

He said all G-20 member nations should cooperate to develop a smooth strategy, adding that “it will be the major topic of discussion both in Canada and Korea.”

The G-20 leaders will meet in June in Canada. Seoul will host another summit in November.

Tayal said it was promising to see the G-20 Summit play a significant role to bring about cooperation of major economies during the crisis, but he believes the group should stay as a forum to discuss financial and economic issues only, rejecting the speculation by some experts that it may play an expanded role as a new global governance body.

“For other issues, there are other forums available,” Tayal said. “The G-20 must not lose its focus.”

He also said now that the global economic situation is recovering, it will be enough for the summit to take place annually. “Korea is showing very good improvement. In India and China, there is good growth,” he said. “A once-a-year meeting should be sufficient after 2010.”

The Indian ambassador said the global economic crisis had hit India hard, but not as much as some other nations. “Before the crisis, India was growing 8 to 9 percent a year,” he said. “The crisis did hit us hard, but we managed to have 6.7 percent growth last year, and we expect 7.7 percent growth this year.”

Tayal said such a situation was possible because of the special nature of the Indian economy.

“Our internal market is very big, and our economy is not very export-dependent. Only about 15 percent of our economy is dependent on exports. That’s why we could weather the crisis.”

The Indian envoy said he has high hopes for further development of economic cooperation between Korea and India, since the bilateral Comprehensive Economic Partnership Agreement went into effect as of this year.

“The CEPA is more than a simple FTA. This really is our attempt to have a partnership with Korea,” he said. “By partnership, what I mean is not simply a buy-sell relationship. It is more than that.”

He said the agreement will open a new opportunity for Korean manufacturers by opening operations in India, where resources and manpower can be provided more cost effectively. The manufacturers will be able to sell the products not only in the Indian market, but also in other markets around the world, he said.

He also said India looks forward to becoming a partner in Korea in the IT industry.

“We are very strong in IT services. This CEPA will open the doors for our companies to work more successfully in Korea in partnership,” he said. “One of the provisions in the CEPA is that Indian professionals will be able to come here on a contract basis. That will allow our IT experts to come and work in Korea. We are looking for a very long-term partnership with Korea.”

He said major Indian IT companies such as Tata Consultancy Services and Wipro already have operations in Korea. “They have been here, but somehow they did not make a big impact,” he said, adding that he thinks it will take India’s IT services time to settle in Korea.

“I think it takes time to open a new market. There will be two reasons,” he said. “One, of course, is the language barrier. Our experts only work in the English language.”

Tayal said he, in that sense, was very happy to see the recent launch of the Indian Chamber of Commerce in Korea. “Its mission is [to] bring the CEOs together from India and Korea to bridge the information gap,” he said. “It is also to convince the CEOs of both sides about new opportunities, and I have a lot of hope.”

He said Korea’s prospects of exporting nuclear reactor technology to India is bright, because his government has an ambitious program to resolve the nation’s extreme electricity shortage.

“There was already a partnership established between Kepco and the nuclear power corporation of India,” he said, adding that he thinks details would be disclosed in about a year.

He also said the Indian government has spent billions of dollars every year on defense procurement and this market will also serve as an important opportunity for Korea.

“Now we want to develop new systems together with other countries. We want to again be a partner with Korea to develop new weapons systems,” Tayal said. “This is a new area for cooperation. I am very hopeful that in the years to come, this will become a major area of our relationship.”