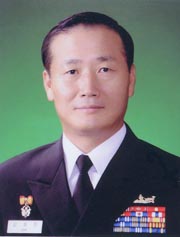 If Kim’s nomination is approved during a cabinet meeting today, President Lee Myung-bak will officially appoint Kim, said Kwon Doo-hwan, an official under the Office of Personnel Management at the ministry.

Kim, 56, would replace Adm. Jung Ok-keun and serve for two years after he takes an oath on Friday, Kwon said.

Kim is an arms specialist who served as the commander of the first naval fleet based in Donghae, Gangwon, and head of the Navy’s arms planning bureau at the Navy headquarters in Gyeryongdae, South Chungcheong. “The vice admiral was recommended and appointed by the Defense Minister based on many considerations, including his expertise in the arms field and his operation planning capability to prepare for future security contingencies,” said Kwon. Kim is seen as highly proficient in English as well having a global outlook following study at the Defense Academy in England and other overseas training.