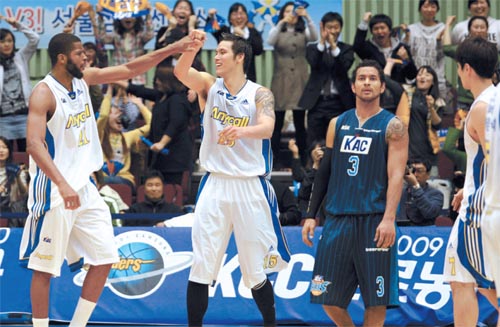 Lee Seung-joon of Samsung Thunders, second from left, celebrates with Victor Thomas after a game three win on their home court on Monday night. By Jung Si-jong

The Samsung Thunders lived to see another playoff game. With the KCC Egis set to take on the Thunders in game four tonight in Jamsil, southern Seoul, starting at 7, the outcome of the match will depend largely on the performance of the teams’ backcourts.

On the brink of elimination in the best-of-five Korean Basketball League first-round playoff series against KCC, Samsung came back from a seven-point halftime deficit to a 92-84 win on Monday in front of a boisterous home crowd of 6,600. “Don’t be writing articles about KCC advancing to the semifinals just yet,” Samsung head coach Ahn Joon-ho said in a pregame interview on Monday afternoon. “We will win tonight to turn the tide and use it as motivation.”

Samsung was able to win largely on the efforts of the three-guard lineup of Kang Hyuk, Lee Jung-seok and Lee Sang-min. Samsung’s backcourt outclassed its opponents by shooting 50 percent from the three-point line compared to KCC’s 26 percent, and also added 24 assists compared to KCC’s 13. Lee Seung-joon and Victor Thomas held their own inside the paint for a combined 42 points and 15 rebounds, and Lee Kyu-sup and Kim Dong-uk’s timely shooting also contributed to the win.

“We took advantage of the mismatches,” said Ahn in a post-game interview. “We were able to rekindle our hopes of making it to the semifinals because our players weren’t going to lose on the home court. We will play for our fans again in game four.”

In order for Samsung to stretch the series to the fifth and deciding game, it will need to find a way to contain KCC point guard Jeon Tae-pung. With center Ha Seung-jin out with an injury, Jeon, Ivan Johnson and Terrence Leather have been the leading men for the Egis in the first round.

On Monday, Samsung went with Kang Hyuk, Cha Jae-young and Lee Jung-seok, who rotated defending Jeon. The plan worked, as Jeon looked fatigued in the second half and posted two points and one assist in the third quarter.

“Tae-pung should have read the defense. Instead of Tae-pung getting the ball, we had Im Jae-hyun and Choo Seung-gyun getting touches which led to turnovers,” KCC head coach Hur Jae said after the game.

In the history of the KBL, only one team has come back from a two-game deficit to win a playoff series. The Samsung Thunders have a monumental task against the reigning champs, but judging by their performance in game three, it’s still early to write off the Thunders.