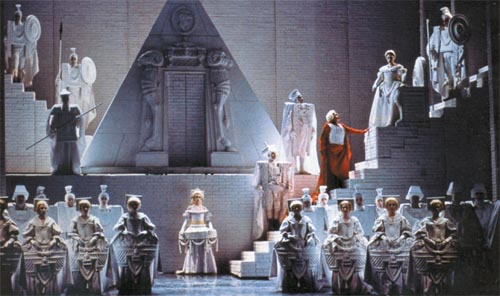 A scene from a Pizzi production of “Semiramide.” Provided by the Korea Opera Group

“Heroines” are the common thread between two of the most-talked-about works of the current Korean opera season - “Juditha Triumphans” and “Semiramide,” which make their premieres here in April and May.

In Juditha, the title character breaks through enemy lines to bring back the head of the enemy general. The fierce Semiramide is a woman who will do anything - not excluding murder and violent politics - to win power and love.

While the two heroines appear in works composed by Antonio Vivaldi and Gioachino Rossini, when they premiere in Seoul they will have something in common - veteran Italian director Pier Luigi Pizzi. And it will be interesting to see how “aggressive women” previously unknown to Korean opera will be depicted in each piece.

Vivaldi’s Juditha Triumphans made its debut in November 1716, in a cathedral in the Ospedale della Pieta girls’ orphanage in Venice. There, a violin and choir teacher wrote an oratorio - a large-scale vocal piece which is similar to a modern-day opera in that it requires the use of drama and stage equipment. All five characters, including the male roles, were played by the girls of the orphanage, and immense success followed the premiere of the four-part chorus piece, in large part due to the seamlessly interwoven instrumental sounds and vocal notes.

Vivaldi, well-known for his violin concerto “Four Seasons,” is said to have composed four oratorios in total, but Juditha is the only one that remains. So for the 80-year-old Pizzi, the key to this oratorio is historical authenticity.

“Only women singers appear on stage - the way it was during its initial performance. [By doing this] I wanted to emphasize the importance of the only surviving opera composed by Vivaldi,” said Pizzi, who will be conducting the performance in Korea next month.

The opera’s plot follows Judith of Bethulia, an Israeli widow who seduces the Assyrian general Holofernes, then slays him. In the upcoming performance, the parts of Holofernes, his squire Vagaus, and Bethulia’s leader Ozias are all played by women. The chorus is also all-female.

Pizzi describes Holofernes as “a character who is blinded by love, someone feminine and sentimental rather than simply a ferocious enemy general.” The director’s dramatic interpretation illuminates the peculiar similarities and contrasts between male weakness and female aggression.

Pizzi will also be directing the premiere of Rossini’s renowned Semiramide, which will be in town in May. The mythical Babylonian queen Semiramide poisoned her husband, King Nino, fearing that she would be dethroned. Her love affair with a young general and ambition for the throne connects on many levels with contemporary cultural ideas of “aggressive women.”

In this opera, too, the heroic male part will be played by a female contralto, who sings in the lower register. Pizzi explained, “The solemn contents of this mythical tale will be portrayed in the classy low-pitched tones of a woman.”

While Pizzi had the option of casting a male countertenor to sing the part in the upper register, he chose to use the contralto so that the silky, full female sounds would accentuate the strength of the piece. The final product incorporates the strength of female vocalists and the ferocity of passionate characters.

Pizzi has previously staged Semiramide, which originally premiered in 1823 at La Fenice theater in Venice. The Korean version to be staged this May will be based on his 1983 production.