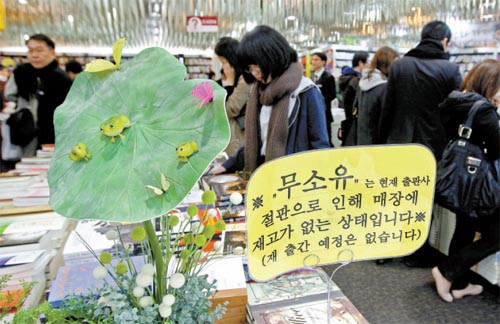 Readers look for copies of books by the late Venerable Beopjeong at Kyobo Book Centre’s main branch in Gwanghwamun yesterday, behind a signboard that reads, “We have no more copies of ‘Non-possession,’ and the book will no longer be published.” [YONHAP]


The death of Venerable Beopjeong, one of the nation’s respected spiritual leaders, has provoked an unusual response: Mourners are stampeding to bookstores, desperate to grab up the last copies of the monk’s books before they go out of stock - forever.

The monk and prolific author died of lung cancer at age 77 on Thursday, and when it was revealed that his will called upon his publishers to stop printing his books after his death, sales leapt dramatically. His works now top the best-seller lists at major stores across the country, including Kyobo Book Centre and Youngpoong Bookstore. Most branches have now set up special booths for the Venerable Beopjeong’s books, with some already sold out.

The Buddhist leader was widely known for his best-selling books including “Non-possession,” and some of his works are included on recommended reading lists for middle and high school students preparing for the College Scholastic Ability Test.

Non-possession is already sold out at major online book stores. It’s listed as “out of print” at Kyobo Book Centre’s online bookstore, and as “sold out” at YES 24.

Kyobo said 1,000 copies of the Venerable Beopjeong’s books were sold at its Gwanghwamun headquarters alone on Monday. The shop set out its stock of 30 works by Beopjeong upon his death, but now it said it has copies of only three left. Youngpoong Bookstore’s Gangnam branch managed to put out 300 copies of the late Buddhist’s books on Monday, but they were sold out two hours later.

“We get calls from people who ask about the Venerable Beopjeong’s books every five to 10 minutes,” said Kim Su-jeong, an official at Youngpoong Bookstore’s Jongno branch.

“I traveled all the way here by express bus from Cheongju in North Chungcheong to get the Venerable Beopjeong’s writing,” said Kim Yeong-hui, a 47-year-old homemaker, shopping at Youngpoong in downtown Seoul.

“I need to follow his will,” Yoon said. “To reprint the book, we need the approval of the writer, but he passed away. If the Buddhist leadership makes a different decision later, I will follow their decision.”

More than 3 million copies of Non-possession have been sold since it was first published in 1976.

Officials in charge at publishing companies that publish other books written by the late Buddhist holy man said they would make their decisions on whether to continue publication of the books once the monk’s wishes had been confirmed.

Asked whether publishers would be obligated to respect Beopjeong’s wishes, Kim Young-chul, a lawyer who specializes in intellectual property, said that in a legal sense, they were under no obligation to do so, because the contracts to publish books were still valid.

“Rather than solving this matter from a legal standpoint, aides of the Venerable Beopjeong who know the book contracts and his dying wishes well need to decide about the matter after discussing it with the publishing companies,” Kim suggested.