A miracle salve or another stem cell fraud?

A miracle salve or another stem cell fraud?

In Korea, the term “stem cell” conjures up unhappy memories of Dr. Hwang Woo-suk, the cloning scientist who was crowned as a national hero back in 2004 only to be disgraced when it was revealed that much of his work had been fraudulent.

Yet even that national trauma didn’t damage the reputation of those two magic words, which now are being used to sell cosmetics. Makeup and skin products using stem cell-derived ingredients are already on the market, in fact.

Korean authorities have long harbored doubts about the safety of these products - but they haven’t decided just what to do about it yet.

In March last year, the Korea Food and Drug Administration was ready to propose a prohibition on the use of any material originating from human stem cells in cosmetics. The list of materials to be banned included stem cell culture fluid, as the agency said materials extracted from human cells could spread HIV or hepatitis viruses.

The measure would have removed from store shelves all cosmetics made from stem cells. Although stem-cell culture fluid is in the “International Cosmetic Ingredient Dictionary and Handbook,” which lists labeling names for the United States, the European Union and other countries, the KFDA was certain the fluid had safety issues.

In November, however, the agency softened its stringent stance, removing culture fluid from the banned list along with new regulations on cosmetics ingredients. Industry insiders said the government’s reversal came after harsh protests from cosmetics developers and manufacturers, who consider the ingredients a “new growth engine.”

Yet it wasn’t a blank check. The KFDA told cosmetics firms and consumers it would develop new regulations for stem cell cosmetics by June 2010. “Rather than entirely prohibiting [stem cell-related cosmetics], laying out safety rules seems like a better idea, given the attention [they attract] in the cosmetics communities at home and abroad,” read a KFDA statement released at the time.

That deadline won’t be met. A high-ranking official with the KFDA, part of the Health Ministry, said regulators are now “trying our best to make it by the year’s end.”

The official, who asked not to be named, said, “We don’t know for sure what’s in the stem cell culture fluid, and the culturing process leaves room for viral infection. It’s impossible that there are no problems with the material.”

Asked why the regulations are being delayed, the official only said, “We are now working on measuring sticks to guarantee [the cosmetics’] safety. It takes a sizable amount of time to review the technical feasibility of these measuring sticks.”

Despite Hwang’s fall from grace, products with the words “stem cell” on them still enjoy a halo effect on the Korean market, and “stem cell cosmetics” has emerged as a buzz phrase in the local beauty industry, particularly in the past two years. Promising to help fight the aging process and even revive youthful skin, the controversial beauty products are quickly gaining traction in the world’s seventh-largest cosmetics market.

RNL Bio, a Seoul-based biotech firm, launched what they call the country’s first stem cell cosmetics early last year. The company, which gained fame in 2008 for cloning a pit bull terrier at the request of an American woman whose dog had died, named the product “Dr. Jucre,” short for “Juvenescence Creation with Cell Regeneration.” Consisting of serum, cream and a sheet mask, Dr. Jucre started making house calls in the United States last August, and an RNL spokeswoman, Kim Yoon, said the line will hit shelves at major department stores in Seoul in the coming weeks.

Other local biotech ventures such as Histostem, Prostemics and BioSpectrum have followed in RNL’s footsteps, marketing stem cell-derived products that range in price from 100,000 won ($88) to millions of won. A flurry of smaller, low-profile enterprises and private hospitals are also involved in the burgeoning business. But the industry remains a statistical blind spot - no private or government figures on the size of the market, the number of companies or the consumer demographics are currently available. 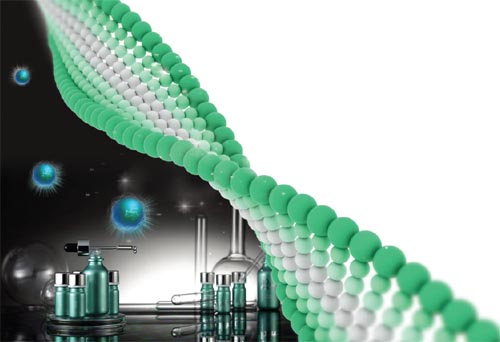 Despite the name, no “stem cell cosmetics” actually contain human cells. Using actual human stem cells in cosmetics has never been allowed in Korea due to the potential risk of infection. The same is true in the United States and the EU.

In the majority of cases, the new cosmetics are comprised of conventional anti-aging agents derived from marine and botanical products, along with stem cell culture fluid - liquid that has been used to culture stem cells but does not actually contain any human tissue.

Actual stem cells are quite potent. As the only human cell capable of differentiating into many different types - into part of the liver or kidney, say - they could help repair the body by repairing otherwise irreversible damage to internal organs caused by disease or injury.

Adult stem cells, as opposed to the variety derived from embryos, which is not used for cosmetics, are usually extracted from fat tissue removed in liposuction surgery at hospitals. Some cosmetics producers take them from human umbilical cords. The companies say they have patients sign release forms to use the cells.

But where stem cells themselves may have a seemingly miraculous medical potential, stem cell culture fluid is still unproven. The companies say that stem cells discharge “cell growth chemicals” as they grow in the culture fluid, which gives their products the ability to slow the aging process and improve elasticity. The firms claim the substances are innovative enough to replace even such well-established treatments as retinol, a type of vitamin A, and the exfoliating agent glycolic acid.

Most stem cell cosmetics manufacturers cite clinical tests of up to 25 weeks that they say prove their products are highly effective in reducing wrinkles and boosting skin moisture and elasticity. They also cite documentation guaranteeing no health risks, though the validity of all these claims are often unverifiable.

But some others provide little more than flowery words. One company’s Web page depicts stem cells extracted from human umbilical cord blood as “a noncontroversial source of stem cells derived from nature’s own river of eternal youth.” When asked about stem cell cosmetics over the phone, a worker at the company said, “Since it’s not a chemical product, there should hardly be any side effects. If you discover red spots and rashes after testing it on the back of your hand, stop using it.”

Medical experts are suspicious of both the health risks and effectiveness of these wonder products. “Whether it’s cosmetics or medicine, any clinical test period is supposed to be lengthy. It’s too early for stem cell cosmetics producers to say their products have no health risks after testing them for less than a year. Infection through topical application is highly possible, even if problems have yet to arise since these products have been out for only two years,” said Dr. Oh Il-hoan, a professor at the Catholic University of Korea’s medical school. For example, Oh said, one medicine used to treat degenerative arthritis underwent clinical testing for four years, and when problems arose in the fourth year the entire project was scrapped.

“I can see that the state health watchdog is in a very hard place. On one side, it needs to encourage stem cell businesses, but on the other side it has lingering doubts about their safety. [The KFDA] has no choice but to be politically affected by the commercial sector,” Oh added.

Perhaps even worse for such potentially risky materials, no stem cell cosmetic product has yet been officially recognized for its anti-aging function, according to the KFDA. Another KFDA official, who also requested anonymity, said, “None of the so-called stem cell cosmetics out on the market have scientifically proven to us their effectiveness.”

Dr. Oh mused, “I’m afraid consumers are paying extra costs for effects that don’t exist. Even if the products show visible effects in the short term, nobody can guarantee if they will cause side effects later.”

Lee Ju-hong, a spokesman with the nonprofit Green Consumers Network in Korea, pointed out a more fundamental issue. “Basically, the KFDA is saying it wants to give more autonomy to those stem cell cosmetics producers and punish them if any issue erupts later. That is what the United States is doing,” he said.

But under the Korean legal structure, which is based on European law and emphasizes preliminary regulation, the KFDA loses its chance to penalize companies heavily once their products go to market. Korean law does not allow harsh punitive measures for companies causing consumer damage like U.S. law does, according to Lee.

The network spokesman continued, “The most desirable scenario would be for the government and cosmetics producers to quickly join together and come up with guidelines on stem cells in cosmetics. The government should not repeat its practice of issuing a prescription after the patient’s death.”