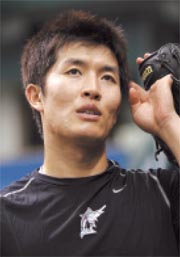 Kim Byung-hyun’s brief stay with the San Francisco Giants has come to an end. The veteran pitcher is expected to look into the possibility of signing on with another Major League Baseball team.

Kim, 30, who threw for the Pittsburgh Pirates during 2008 spring training, signed a minor league contract with the Giants last month. His contract was to be renewed on a fortnightly basis but was not renewed yesterday. On the updated 40-man roster posted on the San Francisco Giants Web site, Kim’s name is not included, indicating the Giants had decided not to retain the rights to the pitcher after two weeks.

Kim’s contract was loaded with incentives which would have been beneficial to the pitcher had he managed to make it to the Major Leagues. Kim reportedly participated in his final practice with the Giants before meeting with a team official and his agent.

The pitcher and the club were on different tracks from the start: Kim reportedly wanted a systematic rehabilitation training program to get back into playing shape, while the Giants wanted him training in step with the other pitchers on the roster.

Kim’s lone appearance for the Giants in the spring training Cactus League came on March 7 against the Milwaukee Brewers in Maryvale, Ariz. In a relief role, Kim entered the game at the bottom of the fifth with two outs, a man on third and his team trailing 4-1. He gave up a home run to Ryan Braun in what would be his first and last appearance for the Giants.

Kim has said in the past that he had no intention of pitching in the minors and was focused on making it back to the Major Leagues. The Gwangju native has told the Korean media he will look into the possibility of signing with another MLB club and has not ruled out the possibility of signing with Korea Baseball Organization or Nippon Professional Baseball teams. If Kim should choose to return to Korea, the Nexen Heroes own the rights to negotiate with him.