Art magnate steps in to revive the auction house he founded

Art magnate steps in to revive the auction house he founded 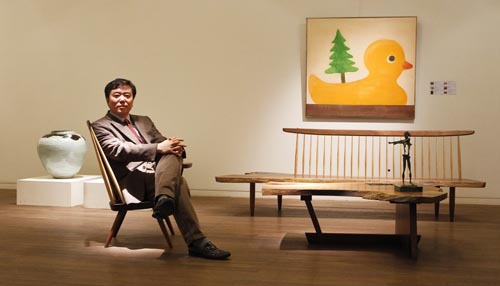 Lee Ho-jae sits in a hall at Seoul Auction in Jongno District, where a design auction will be held April 17. By Shin In-seop

Lee Ho-jae may be unfamiliar to the wider world, but he’s a star of the Korean art world. At age 29, Lee opened his first art gallery, and within 20 years, he had built up an empire.

Today Lee is 56 and chairman of Gana Art Gallery. But that isn’t enough for him, it seems. In January, he was named co-chief executive officer of Seoul Auction, the company he founded in 1998. Lee is already the largest shareholder with a 36.1-percent stake.

Seoul Auction was the first cultural business to be listed on the Seoul stock market in July 2008, but its shares have rolled downhill ever since. In fact, the company’s stock has never gone above its initial offering price of 11,000 won ($9.75). Today, it’s caught in a lull, around 3,000 won.

Unable to stand for this situation anymore, Lee said he had to step in. His strategy: new businesses, such as design auctions. Needless to say, investors and art world insiders are watching Lee’s every move. JoongAng Sunday interviewed Lee last week to ask about his plans for Seoul Auction and his tricks for investing in art.

Q. Seoul Auction’s current stock price of around 3,500 won is only one-third the offering price. How did things get so bad?

A. Currently, the stock is too cheap. The company’s assets exceed its market capitalization. Above all, it’s mainly due to the enduring recession in the art market.

In 2007, successful bids [at Seoul Auction] totaled 200 billion won in the local market, but last year, it was barely over 70 billion won. The global financial crisis also affected the art market.

Surprisingly, the stock price of Sotheby’s, a global art auction house, went over $30 recently after falling drastically to $6 during November 2008, proving the revival of the art market.

However, the stock price of Seoul Auction has remained the same.

I think this is due to a lack of publicity for the art market. Many people still consider the art market to be a different world. Only 1,600 people have bought at least one piece through Seoul Auction so far. There are 195,000 people who earn more than 100 million won annually in Korea. My task is to attract those people to the art market.

What new projects are you planning?

My plan is to diversify our auction portfolio - basically, to start auctioning in other categories rather than focusing on fine art pieces. There are only about 20,000 students now nationwide majoring in fine arts or sculpture, but students majoring in design, photography or architecture number 110,000.

Plus, when there’s an exhibition, photographs attract more people than drawings, and designs attract more than photographs. This means that design and photography are quite widespread, but auction houses haven’t been able to cover these areas. And that’s what I’m planning to do. Seoul Auction will start its design auctions on April 17.

What are your predictions for the art market this year?

It will improve. Art prices, which plummeted due to the financial crisis, have almost recovered.

Art was the first to crash during the financial crisis, although many believed the art market could be an alternative investment to stocks or real estate.

Art is no exception to falling prices during a recession. But it’s wrong to see artwork only as an investment. It has an intangible value, and people have to admit that. Investing in art surely requires money, but not just that. It requires affection.

How do you choose art pieces?

There is no royal road. You just have to see a lot and meet a lot of people. You have to develop a discerning eye.

That’s pretty abstract. Can you recommend any specific artists?

It’s hard to say. Let me put it this way. A piece by an artist who has just graduated from school is usually priced at 3 to 4 million won. It’s O.K. to purchase pieces by artists who have held exhibitions once or twice at credible art galleries. In fact, galleries think of giving a fresh artist a chance to hold his or her first or second exhibition as a gift.

To get the artist’s name out there, the gallery offers his or her works at relatively cheap prices. Still, it’s more important to buy one decent artwork than to buy many inexpensive ones.

What other plans do you have?

Galleries coexist with artists. Even though [the famous art dealer] Leo Castelli is dead, [pop artist] Roy Lichtenstein’s name remains. My calling as chairman of Gana Art Gallery is to train good artists. As chairman of Seoul Auction, I want to gain the public’s trust. My workers and I would never let you down. I am planning to hold various investor relations meetings and actively introduce the value of our company.