North thought to have more missiles

North thought to have more missiles 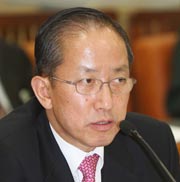 In a sign that it will not give up its atomic ambitions, North Korea is believed to have some 1,000 missiles, including intermediate-range and Scud missiles, and is continuing to produce the highly enriched uranium used to make nuclear weapons, South Korean Defense Minister Kim Tae-young said yesterday.

Intelligence authorities in South Korea and the United States had estimated that the reclusive communist nation possessed about 800 missiles as of 2008. That number has apparently surged in two years.

During a Cultural and Economic Forum held at Daishin Security Company headquarters in Yeouido, Seoul, Kim said the North has deployed missiles that are capable of reaching Guam and India, with a range of more than 3,000 kilometers (1,864 miles).

The minister added that the North is believed to have 30 to 40 kilograms (66 to 88 pounds) of plutonium, which is used to make highly enriched uranium.

He added that social and economic concerns, as well as public discontent with the system, have intensified since the recent monetary reform drastically devalued the North’s currency, causing riots in some places.

“North Korea is making an effort to stabilize the Kim Jong-il regime and solidify the governing system,” Kim said. “The leadership is trying to secure international assistance in order to dig itself out of economic difficulties.”