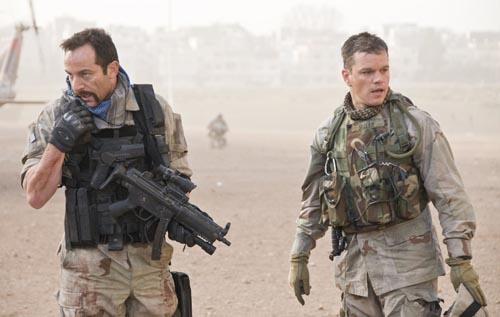 Matt Damon has not shied away from revealing his political views. He caused a stir before the last U.S. presidential election when in an interview he described Republican Sarah Palin’s rise as akin to “a really bad Disney movie.”

Damon’s latest, “Green Zone,” is a thriller set in Iraq from Paul Greengrass, who also directed two of the popular “Bourne” spy films. It hits American and British cinemas on March 12 and Korean theaters on March 25. The film is based on a behind-the-scenes account of how the Bush administration failed to find weapons of mass destruction after the 2003 Iraq invasion.

Damon talked to Reuters about the film.

Q. How was it acting alongside real soldiers?

A. Playing a guy who is barking orders at real vets who just got back from Iraq as an actor was really daunting ... I felt like the movie actor who is acting like he is in command of these guys who have just really gotten back from a war. It is kind of a weird thing. And it was the guys who said, “Look, you have to do it and if you don’t, the whole thing doesn’t work. But whatever you tell us to do we will do, we know how to follow orders.”

Did you have any trouble connecting with these guys who have just returned from war?

Very, very different lives and different experiences. But I found it great to talk to them and fascinating to talk to them and it was really interesting. It was a great cross section of political views among them. It wasn’t partisan. It wasn’t like we made the movie with a bunch of Democrats. These are military guys, so there was a true representation of America both politically and geographically. We had guys from all over the country.

So you didn’t mention your criticism of Palin?

I made that one comment about Palin and it got so much play! I was really surprised by that actually. It has survived on YouTube.

Did you talk to the soldiers about how you feel about Obama’s troop increase in Afghanistan?

What does this film say about the failure to find any weapons of mass destruction?

I hoped that the one thing the movie would do is to show soldiers in a very positive light ... because what you have seen are the incredible risks these guys have taken because we have asked them to go. So if we are going to ask that then we can’t send them somewhere where there are no weapons of mass destruction.