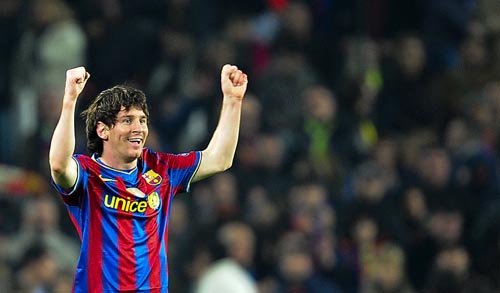 FC Barcelona’s Lionel Messi celebrates after scoring against VfB Stuttgart during their Round of 16 Champions League match at Camp Nou stadium in Barcelona on March 17. [AP/YONHAP]

Pedro Rodriguez and Bojan Krkic hit the target as Barcelona went through 5-1 on aggregate despite missing injured midfielder Xavi Hernandez.

Leading 1-0 from the first leg, Bordeaux scored a goal in the fifth minute from a bending free kick by Yoann Gourcuff. Kostas Mitroglou replied for Olympiakos with a long-range drive but Marouane Chamakh added an acrobatic headed goal for a 3-1 overall victory.

Barcelona and Bordeaux join Manchester United, Arsenal, Bayern Munich, Lyon, Inter Milan and CSKA Moscow in the last eight. The draws for the quarterfinals and semifinals will take place today at the Union of European Football Associations’ headquarters at Nyon in Switzerland.

Even without Hernandez, who was out with a calf injury, Barcelona had too much talent for Stuttgart at Camp Nou. Playing at his magical best, Messi collected a ball from Yaya Toure in the 13th minute and ran at the Stuttgart defense before firing a 20-meter (66-foot), left-footed shot into the top corner of the net.

Pedro added the second in the 22nd minute when he tapped in a low cross from Toure in a move started by Messi.

Messi made it 3-0 in the 60th when he turned a defender just outside the area and fired a low shot past goalkeeper Jens Lehmann.

The Argentina star, who scored three times against Valencia in the Spanish league last Sunday, should have had another hat trick in the 86th minute when he dribbled past three men but rolled the ball wide of goal.

Bojan added the fourth with his first touch in the 89th minute after receiving a pass from fellow substitute Zlatan Ibrahimovic.

From wide on the left in the fifth minute, he curled his shot over the goalkeeper and in off the inside of the far post. Gourcuff also hit the bar and post with a near identical free kick in the final minute of the first half.

Olympiakos’ Matt Derbyshire put the ball in the net but it was ruled out for offside. The English striker was sent off in the 60th minute after his second yellow card.

Despite being down to 10 men, the Greek champions hit back and substitute Mitroglou equalized on the night with a powerful right-footed shot in the 64th minute. The game became 10 against 10 when Bordeaux’s Alou Diarra was sent off for a lunging tackle five minutes later.

That meant a second goal for Olympiakos would have put the Greek club through on away goals. But Chamakh jumped highest to head home a left-wing cross in the 89th minute, tumbling over his opponent as the ball flew into the net.

Bordeaux has now reached the last eight of European football’s most prestigious club tournament for the first time since 1988.

In Tuesday’s games, Inter Milan beat Chelsea 1-0 at Stamford Bridge to advance 3-1 overall and CSKA Moscow reached the quarterfinals for the first time by beating Sevilla 2-1 and 3-2 on aggregate.