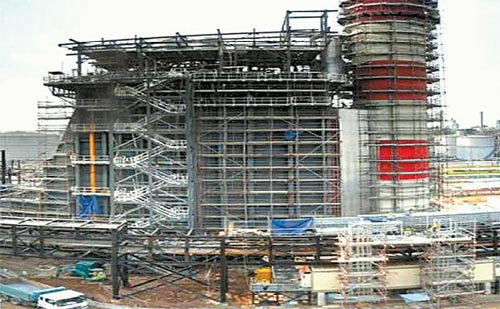 At Samsung C&T Corp., the name of the game is power plant engineering, procurement and construction - also known as EPC.

The company has developed teams focused specifically on power plants and nuclear technology, as it has concluded that demand in these areas of the market will increase substantially going forward.

Although the company entered the market for power plants somewhat later than its competitors, Samsung C&T has quickly become a global leader in this area. Over the past 10 years, it has secured more power plant projects than any other local construction company.

Recently, it won an order to build a plant in the United Arab Emirates and secured preferable status for the construction of a coal fired power plant in Kazakhstan, expanding its reach in the global market.

Samsung C&T will be in charge of various design elements of the project and spearhead the construction of power plant supply and electricity facilities. It will also install equipment and test the facility before it opens.

Samsung C&T competed with the world’s largest power plant construction company, France-based Alstom, and other renowned firms from Europe and Japan. The company’s track record of building similar operations in Singapore and Indonesia helped it win the U.A.E. deal.

Samsung C&T is able to achieve economics of scale by utilizing its previous experience, which also helped it remain competitive on the price side of the equation.

The company is also working on a project to build a power station on Jurong Island, which lies off the southern tip of Singapore.

Samsung C&T is responsible for the engineering, procurement and construction parts of the project and is applying project management information system concepts, which help ensure that it can carry out the contract effectively, efficiently and smoothly.

It previously build the first and second power station at the site. That experience, combined with its work in Indonesia the Southeast Asia region, Samsung C&T was able to successfully bid for the project to construct the third and fourth power station.