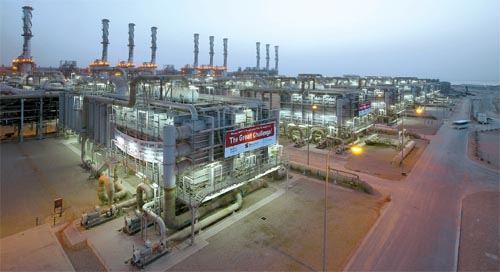 The Jubail Desalination Plant in Saudi Arabia, completed by Ssangyong E&C in July 2009, is the world’s largest. It can produce 800,000 tons of drinking water per day.

Ssangyong Engineering and Construction has completed 132 construction projects in 19 countries worth $7.8 billion in the United States, Japan, Singapore, Indonesia, Southeast Asia and the Middle East since the company was founded in 1977.

Ssangyong built Singapore’s 73-story Swiss Hotel, recorded in the Guiness Book of the World Records as the world’s tallest hotel, as well as Raffles City. Currently it is working on the Marina Bay Sands Hotel, the largest overseas construction project ever for a local company and Singapore’s first casino-resort development project.

In Singapore, Indonesia, Japan, Guam, Dubai and Bali, Ssangyong has built world-famous Hyatt and Intercontinental hotels. Last year in Singapore, it won a bid to build the luxury hotel Quayside.

In the late 1980s, the company designed, planned and built the Anaheim Marriott Hotel in Korea’s first overseas investment development project and promoted a total of seven development projects in America. In the late 1990s, it entered the Dubai market and built the 305-meter Jumeirah Emirates Towers Hotel and the Grand Hyatt Hotel, opening up the market to other local firms.

Ssangyong E&C has been near the top since it was ranked second in hotel building in 1998 by the U.S. construction magazine ENR. The company possesses experience building 13,000 luxury hotel rooms and 8,000 hospital wards.

The Singapore Marina Bay Sands Hotel is Ssangyong’s most difficult challenge yet. The 55-story framework for the triple towers, which will contain 2,507 rooms, was completed in July 2009, after just 18 months. Like a gateway to Singapore, each entrance leans towards the ground to an unprecedented degree. The company aims to complete construction of the rooms and the sky park to connect the three towers by early this year.

In November 2008, Ssangyong won the bid for the 482 section of the Marina Coastal Expressway in Singapore, worth $633 million. This is a “design and build” project, calling for planning and building at the same time. The 1-kilometer section of 10-lane road, partly underground, will be complete by June 2013.

In June 2009, Ssangyong E&C also won a $553 million underground subway bid, the largest such project won in Korea in the past 40 years. A Saudi Arabian desalination plant, the world’s largest, ordered in March 2008 was completed in July 2009. It can produce enough clean water to serve 2.5 million people per day.

This year, the company hopes to expand orders outside the luxury construction field, in difficult civil engineering projects and high-value-added construction work.