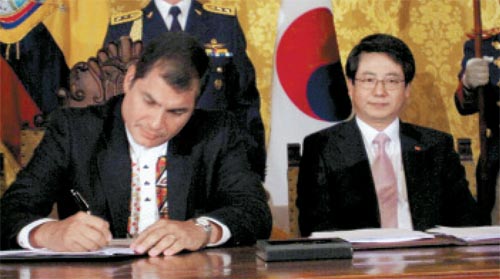 Rafael Correa, the president of Ecuador, signs a contract with SK E&C for an oil refinery design project.

SK Engineering and Construction is diversifying its business base and strengthening its overall competitiveness by aggressively targeting overseas markets, which the company believes will help ensure it has a stable portfolio of projects.

Currently, the company is pursuing a major deal to build an oil refinery in Ecuador, and it recently received an order to repair a refinery in the country as well. It is also working on projects in everywhere from the United Arab Emirates and Saudi Arabia to Thailand and Kuwait.

In the past year alone, SK E&C has landed 10 projects in eight countries worth a total of $4.8 billion.

These projects have allowed it to add civil engineering and construction to its list of overseas business expertise, which is expected to further open up the international market for the company.
By Lee Ji-hyun [concordia@joongang.co.kr]