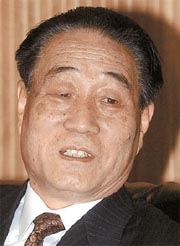 A former top North Korean economics official has been executed for his role in the failed currency revaluation from last fall, a Seoul-based North Korean news Web site reported yesterday. The South Korean government declined to verify the report.

The Web site for Free North Korea Radio, run by North Korean defectors, reported that Pak Nam-gi, former head of planning and economy at the ruling Workers’ Party, was shot in Pyongyang last week. The report cited its stringer in Chongjin, North Hamgyong, in North Korea.

“The North’s regime wanted to stabilize the economy through the currency reform and then credit Kim Jong-un, the third son of Kim Jong-il, for the effort before handing him the reins of power,” the Web site reported. “But once that failed, the regime made Pak the scapegoat.”

In February, Pak was rumored to have been dismissed in the aftermath of the revaluation.

South Korean intelligence sources and government officials said Pak didn’t accompany Kim Jong-il on field inspections early this year, even though Pak had followed the leader on 77 other occasions, the third-highest total among government officials.

The ill effects of the currency revaluation, under which the old 100 won was exchanged for 1 won, have been reported by North Korean human rights and defectors’ groups.

Free North Korea Radio said the price of rice has soared from 20 won per kilogram (2.2 pounds) in early December to 1,400 won as of Wednesday, and that more people are dying of starvation. “People who lost everything after the currency revaluation believe all responsibility falls on Kim Jong-il.”