In a world filled with specialty museums, it’s not uncommon to see one devoted to a specific kind of food. And if the food is, say, chocolate, the best museum to tour may be in Korea, where you can not only view the displays, you can taste them too.

The Chocolate Museum on the southern resort island of Jeju is the brainchild of Hahn Yae-seok, and it’s the delicious result of a long labor of love. 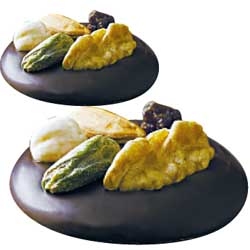 “I got familiar with chocolate while traveling to other countries on business. Chocolate is beautiful and sweet and, above all, chocolates reflect the cultures of the countries in which they’re made, and I like that the most,” said Hahn, 62, the museum’s founder and director.

“I thought to myself - devoting my lifetime to the study of chocolate would be worth it.” 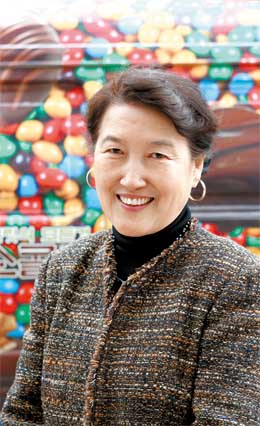 Hahn first had the idea in 1977, when she was working at Citibank and her husband was starting Agabang, believed to be the country’s first baby product company. Whenever the two made business trips abroad or traveled on holiday, they never forgot to stop by the local chocolate shops and factories. Hahn even earned a chocolatier certificate from the Chocolate Academy of Barry Callebaut, the world-famous Belgium-based chocolate makers.

“What I thought [during the economic crisis] was that you may have to quit your job regardless of whether you wanted to,” Hahn said. “I was thinking about what I would do if that happened to me, and what occurred to me was, I can make chocolate so I can do it [as a job] while pleasing people around me by giving it to them.”

The next idea that she had was to build a house where she could make chocolate amidst beautiful scenery. When she visited Jeju, she said she realized that the island - with its long seashores, mountains and agreeable weather - was the best place for her project.

An unused dye factory on the island was up for sale, and Hahn took it over. First she set up a chocolate factory, creating some of the first Korean handmade chocolates.

The chocolates quickly became the talk of the town.

“We offered our chocolate for a Valentine’s Day sales event at the Apgujeong branch of Hyundai Department Store in February 2000, and they generated far better sales than expected, even though our packaging was poorer [than other brands],” said Hahn.

“Then I thought the prospects were good, so much so that I could open the chocolate museum.”

Hahn was right. In 2002, she transformed the dye factory into the Chocolate Museum. Since then, her chocolates have sold so well that she can operate the museum at a profit.

Built out of volcanic rock in a European style, Hahn says it is the only museum of its kind throughout Asia, and the second-largest in the world. Visitors can learn about the history of chocolate, tour the galleries, theater and workshop, and sample chocolate’s many shapes and tastes in the museum’s cafe.

The number of people visiting the museum has continuously increased, to a record 3,000 visitors a day during the summer peak season.

Last year, the museum was included on a list of the world’s “Top 10 Best Chocolate Museums” selected by the members and editors of VirtualTourist.com, a global online community where world travelers exchange information.

“I plan to build a ‘chocolate school’ near Cheongpyeong [in Gapyeong, Gyeonggi] where boys and girls from underprivileged families can learn how to make chocolate and speak foreign languages,” Hahn said. “You can make a living wherever you go if you have a knowledge of those two things.”

Hahn has also set her mind on the so-called “Chocolate Flight” project, in which she would hire a plane to transport children from orphanages and their patrons to Jeju Island, for a tour including the Chocolate Museum.

And her greatest ambition?

Hahn wants to teach the world about Korean culture through chocolate.

“We Koreans put an interesting touch on chocolate, using green tea, cactus and plum, which is remarkable,” Hahn said. “I have this idea of locating a chocolate museum which displays Korean chocolate products in an overseas tourist spot, like say, Niagara Falls.

“Chocolate and tourism are just a perfect match, aren’t they?”