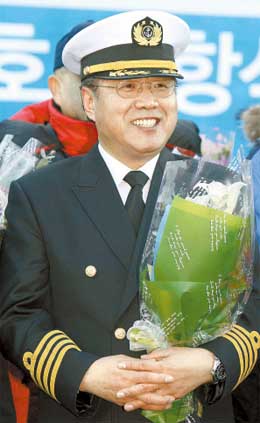 The Antarctic region is legendary for its extreme weather conditions, which are characterized by heart-stopping cold spells and bone-chilling gale force winds.

But Kim Hyun-ryul, the captain of Korea’s first icebreaker, called the Araon, remembers it for a decidedly different reason: warmth.

After successfully completing the ship’s maiden expedition to the Antarctic region earlier this week, Kim said he still recalls the warm treatment and acknowledgment he received from foreign scientists in a remote area of the earth.

“I was able to see that Korea has a high status even in the polar region,” Kim said on Tuesday, a day after the ship returned to Incheon. “I am so proud of my country.”

The 7,487-ton ship, built with local technology, began an 88-day voyage to the Antarctic Ocean last Dec. 18 from Incheon port.

Kim, who graduated from Korea Maritime University in Busan, is a veteran sailor who has been operating merchant vessels for nearly 30 years under Sammi Shipping Company and STX Pan Ocean, the country’s biggest bulk shipping line.

Even though he is a career seaman, however, the Antarctic region opened up a whole new world to Kim.

“While the ship moved ahead by breaking thick ice, penguins wouldn’t move away from the ship,” the 52-year-old captain said. “We had no choice but to sound the horn and change direction.”

Kim also saw a gargantuan, 26-kilometer (16-mile) long iceberg that took about an hour and 20 minutes to clear.

The captain recalled that he didn’t expect the ice in the polar region to be so beautiful, adding that he saw an array of icebergs and floating chunks of ice in many different shapes and sizes.

The color of the ice, he said, changed according to how much sunlight it was exposed to at a given time.

But he didn’t just look at the ice: He tried it, too.

Crew members brought along some of the key ingredients used for making patbingsu, a frosty Korean dessert featuring ice and red beans, as well as naengmyeon, a cold soup with rice noodles served on ice.

Sailors wanted to see how the dishes would taste with fresh ice and snow from the Antarctic.

The verdict: salty, yet tasty.

“We decided not to make the patbingsu since we thought the ice itself was more delicious,” the captain said.

During its maiden expedition, the vessel tested its icebreaking ability for three days in late January and collected data to select a site for the nation’s second base in the Antarctic region.

A total of 50 people, including 25 scientists, were on board. Upon the ship’s return this week, the Korean government said that the new research base would be built in Terra Nova Bay, which is located in the southern part of Antarctica.

The country’s first scientific base in the region - called the Sejong Research Center - was built in 1988 on King George Island off the Antarctic Peninsula.

The Araon was designed to break ice up to 1 meter (3.3 feet) thick while moving at a speed of three knots, or about 3.4 miles per hour. The captain said the ship hit just one knot on the first trial. After adjusting the draft level, it hit 3.5 knots on the second try.

Scientists on board surveyed both Cape Burks and Terra Nova Bay as possible locations for Korea’s second base in the polar region.

Experts tested the weather conditions, water quality and ecosystems in those two regions. The ship is scheduled to carry out its next expedition in early July.