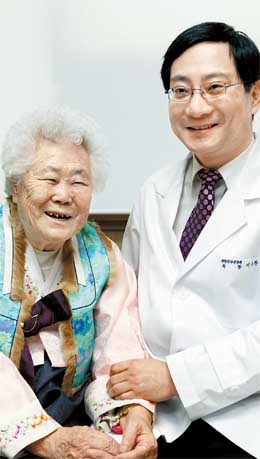 The friendship between former comfort woman Yi Ok-seon, left, and Dr. Lee Su-chan, the head of Himchan Hospital in Seoul, dates back nearly 10 years. Lee performed knee surgery on Yi and paid for the operation through deductions from his paycheck. The doctor also helped Yi’s grandson come to Korea from China to learn the Korean language. By Oh Jong-taek

Lee Su-chan has seen his share of sorrow as a doctor at Himchan Hospital in Seoul.

But he was all smiles the afternoon of March 10 when 83-year-old Yi Ok-seon arrived at his office wearing a hanbok, or brightly colored traditional Korean dress.

The feeling was mutual, as Yi had a grin plastered on her face as well.

“I’ve been through enough rough periods in my life to wipe the smile off my face, but I can’t help but feel cheerful whenever I see Dr. Lee,” Yi said.

The two, after all, go way back.

Dr. Lee, who heads Himchan Hospital in Songpa District, southern Seoul, met Yi for the first time in 2001 when he was an orthopedic surgeon at a hospital in Incheon.

Dr. Lee heard about Yi from a monk, who explained how she was kidnapped while walking down a road in Busan at age 15 and forced to become a sex slave - also known as a “comfort woman” - by the imperial Japanese army some 60 years ago.

The monk told the doctor that Yi had returned to Korea from her most recent home in China 58 years after she was forcefully taken. Yi had long been suffering from knee pains due to the hardships she incurred but couldn’t get proper treatment upon her return, as she was listed as deceased in Korea and therefore wasn’t eligible for health insurance.

Touched by the story and eager to help, Dr. Lee sprang to action and decided to examine Yi’s knees. The doctor discovered that the cartilage and bones in her knees had eroded to a significant degree, making it difficult for her to use the bathroom by herself because of severe pain.

In February 2001, Dr. Lee performed surgery on Yi, inserting artificial knee joints. The surgery was a success, and Yi can now walk without pain.

“I tried every means to cure my knees when I was back in China but it didn’t work,” Yi recalled. “[After the surgery,] I was excited and felt as if I had started a second life.”

The bill for the surgery totaled 20 million won ($17,685), which Yi could not afford. The elderly woman had returned to Korea in 1999 after her husband died with the help of a civic organization but had little money of her own.

Dr. Lee decided to foot the bill, paying for it via deductions from his monthly paycheck.

Since the surgery, Yi has become actively engaged in raising awareness of atrocities the Japanese government committed during its harsh colonial rule of the Korean Peninsula from 1910 through 1945. She participates in rallies in front of the Japanese Embassy in downtown Seoul every Wednesday and has traveled to China, Japan, the United States and other countries to testify about the wrongs she and other comfort women suffered at the hands of the Japanese.

Yi, however, always carves out time for Dr. Lee as well, and they keep in touch via letters. Over the past decade, the two have exchanged more than 100 handwritten letters.

Yi also always gets Dr. Lee gifts whenever she goes overseas. And when she is sick, Dr. Lee drives for two hours to Gwangju, Gyeonggi to meet her at the House of Sharing, a group home for former comfort women.

“Dr. Lee gave me a bouquet of flowers with a pretty ribbon after the surgery,” Yi said. “I put the ribbon in a very visible place to remind me.”

The friendship between the two continues to grow. After Dr. Lee heard that Yi misses the family she left behind in China, he invited her grandson to Korea to learn the language at Kyung Hee University’s Institute of International Education.

Dr. Lee also provided her grandson with a scholarship he established at the Himchan Foundation.