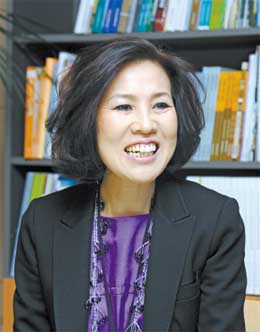 Park Mi-ran served under 32 finance ministers in as many years at the press room of the government’s busiest agency. [JoongAng Ilbo]

The press room at the Ministry of Strategy and Finance in Gwacheon, south of Seoul, is immersed in a constant cacophony, with reporters always on the phone reading out press releases, clarifying quotes and dealing with the latest announcements from the busiest department in the government.

Last Tuesday was even more chaotic than usual because of the promotion of Park Mi-ran, a longtime fixture for ministry reporters. Park, 52, in charge of managing the press room, was given the rank of deputy director late Monday.

Some jokingly called it a demotion, because her commanding presence had earned her the nickname “siljang,” which can refer either to “chief of the room” or to a rank equal to deputy minister. A deputy minister is four notches above a deputy director.

Park had worked in the press room of the Finance Ministry since 1978, when its offices were located in Gwanghwamun, central Seoul. She has served a total of 32 finance ministers, going up to incumbent Finance Minister Yoon Jeung-hyun and as far back as Nam Duck-woo, former vice prime minister and head of the Economic Planning Board, the forerunner of the ministry.

The old hand remembers Jin Nyum from the early 2000s as the most media-friendly finance minister. Jin would drop by the press room as much as he could and talk with reporters, Kim said. Her current boss Yoon also visits the press room regularly, she said.

Some call her Amazon because of her tough style with reporters. But veterans know she has a warm heart beneath the surface.

“Many of the reporters working here have been promoted to the most senior positions at various media outlets,” she said. “Many others left the media industry but still called me to congratulate me on the news. I am so grateful.”

The newly minted deputy director said the working environment for reporters has worsened, and she feels sorry about that.

Asked to share a bit of wisdom for other government officials on how to deal effectively with reporters, Kim said, “Don’t try only to defend. Be open-minded, and you won’t have many problems.”