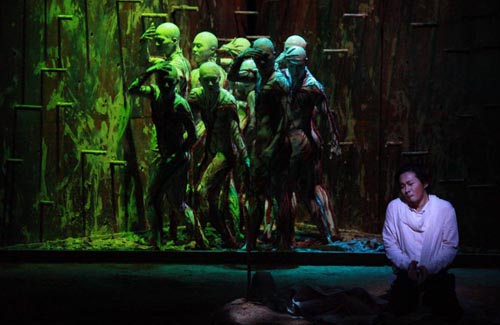 The countertenor David DQ Lee plays Orpheus in the operatic adaptation of the Greek myth “Orpheus and Eurydice” by Christoph Willibald Gluck at the Tongyeong International Music Festival on Friday. Provided by TIMF

The opener was the result of a collaboration between many artists of different media and genres. Lee So-young directed the Nara Opera Choir, Dance Theater Ccadoo and Ensemble TIMF, conducted by Chung Chi-yong, professor of conducting at Korea National University of Arts. Lee also serves as artistic director of the Korea National Opera. The acclaimed countertenor David DQ Lee and soprano Choi Yun-jung played the star-crossed mythological couple.

Organizers said the massive production was right in line with this year’s theme: “Music +.”

“We plan to add and mix various genres including opera, fine arts, dance, film music, literature and musical theater. Though it will be a rather experimental approach, we hope it will help in communicating with the audience more easily,” said Jin Euy-jang, Tongyeong’s mayor and honorary TIMF chairman. “The border between music, fine arts, literature and musical theater will disappear, and only the concept of art will remain.”

Kim Seung-geun, chairman of the TIMF Foundation, has been responsible for programming over the past eight years. He described this year’s theme as “three-dimensional,” after years of “more or less two-dimensional” festivals.

For the last three years, the opening acts at TIMF were orchestras: the Munich Chamber Orchestra, the BBC Philharmonic Orchestra and the Qingdao Symphony Orchestra, playing works by classical composers such as Beethoven, Sibelius and Reinhold Gliere, though they were required to play at least one work by Isang Yun, the Korean-German composer who was born in Tongyeong.

The festival was originally launched to commemorate Yun, who died in 1995, and offer residents of this marine tourist city with a population of just 130,000 the chance to enjoy modern music. After years of struggling to balance appeal with artistic value - which has led to uneven attendance at best - the overhaul is meant to bring popular attention back to this hidden gem.

Yun himself studied in Japan, Germany and Paris in the 1930s and 1940s, while also participating in the Korean independence movement and, later, teaching at Seoul National University. Yun composed a wide variety of contemporary works ranging from operas to concertos, symphonies and vocal and solo instrumental pieces.

The festival opener was followed by a solo recital from world-renowned countertenor Andreas Scholl on Saturday and a duet by two Chopin experts, Lim Dong-hyek of Korea and Alexandre Tharaud of France, yesterday. Last night, noted guitarist and film composer Lee Byeong-woo played with Ensemble TIMF. The ensemble, which consists of young professional musicians, has been an ambassador for Korean modern music since 2001.

Today, stage actress Park Jung-ja will narrate “Kafka Fragments” for soprano and violin by the Hungarian Gyorgy Kurtag. Other performances will include the Norwegian Chamber Orchestra with pianist Leif Ove Andsnes playing Mozart and Prokofiev on Wednesday and “The Rite of Spring” by dancer and choreographer Xavier Le Roy on Thursday.

When the spring season is finished, the TIMF Academy for aspiring musicians will follow over the summer, and the Isang Yun international music competition will be held in the fall.

In the coming years, the music festival is expected to face additional changes. Alexander Liebreich, artistic director and principal conductor of the Munich Chamber Orchestra, will come on board as the new artistic director. A new 1,300-seat concert hall will open in the spring of 2013 on the other side of the city, to take the pressure off the Tongyeong Culture Center, now the one and only venue for the festival. Originally built for theatrical works, it has just 800 seats.

“A new concert hall is expected to enable us to showcase a wider variety of works,” said Kim at TIMF.