Bringing both sides of the news to the G-20

Bringing both sides of the news to the G-20 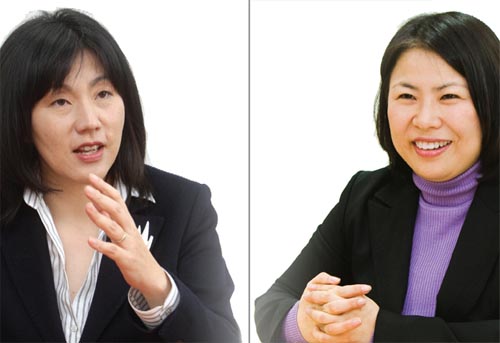 One has spent years fielding reporters’ questions. The other has decades on the other side of the mike.

And they will both be bringing their experience to bear as spokespersons when Korea hosts the G-20 Summit in November.

For Sohn Jie-ae, who for years ended every public speech by saying, “Sohn Jie-ae, CNN, Seoul,” that means figuring out what reporters need, and making sure they get it in a fast, accurate and professional manner.

She should know. The new chief foreign spokeswoman of the G-20 Summit Presidential Committee began her career as a reporter at Business Korea, an English economics magazine, in 1985, going on to become chief reporter for The New York Times in Seoul in 1991 and branch manager for CNN in 1995.

Having covered almost every international conference hosted by Korea, including the Asia-Europe Meeting and Asia-Pacific Economic Cooperation summits, Sohn believed that a transition to being a government representative would allow her to use the wealth of knowledge she had amassed as a foreign news reporter. And her intuition was spot-on. In her new post, she says what’s needed is to give reporters a full and professional briefing - something she says has been neglected in the past in comparison to domestic press briefings, and which she says will deliver the message that Korea has joined the ranks of other international countries.

Sohn is finding her stint on the other end of the microphone nerve-racking. She faces language difficulties: Whereas before she used only English, she now must conduct bilingual briefings. And for the first time, every word she utters in public must be carefully selected, giving her a new understanding of why spokespeople often speak in ambiguous terms.

The latter is something to which former finance foreign news spokesperson Song Kyung-jin brings a practiced hand. And she’ll have plenty of chances as a spokesperson at the summit: According to Sakong Il, the chairperson of the G-20 Presidential Committee, Song is the person who knows the most details concerning the summit.

Song has much experience at passing along information. After earning her doctorate at Kansas State University in the United States, she began working at an international organization in 1999, moving on to become a foreign news spokesperson in the finance administration in 2003.

Since 2008, she has served as Sakong’s aide, and she assisted with G-20 Summit business even before the official launch of the committee.

Like Sohn, Song believes the summit is a chance for “Korea to make its voice heard on the international stage.” She believes that the ultimate significance of the G-20 lies in the hope it offers.

The first meetings for the summit began two years ago, amid the crumbling of Lehman Brothers and the onset of the global economic crisis.

As global pressure on governments to curb the financial crisis grew, she says meetings in Washington, London and Pittsburgh brought promising results to the world financial market.

Even if unnoticed by the man on the street, Song has no doubt that the G-20 Summit conferences have had a stabilizing effect on Korea’s economics, companies and individuals.

Song says watching Korea’s comparative lack of power at the International Confederation of Free Trade Unions in 1999 was a bitter pill to swallow, and gave her strong motivation to join the G-20 Summit Committee. In her new post, she says her goal is to make Korea’s voice heard loud and clear on the international stage.