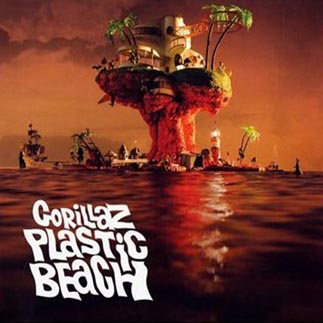 Gorillaz started out as the world’s most famous cartoon band.

Since then their commitment to the original lineup of colorful characters has waned outside of their still-spectacular music videos. Their second album, “Demon Days,” was a gloomy, mid-Bush-years sophomore slump.

Things have brightened up on “Plastic Beach,” which true to its title features a hearty helping of tiki nostalgia alongside some of the wackiest beats the band has ever concocted.

The rap has never been the focus, and that tradition continues here. The biggest name is Snoop Dogg, who turns in a performance on “Welcome to the World of the Plastic Beach” that’s jolly, but nothing stellar (Rhyming “focus” with “hopeless”? Really?). But the lyrics extolling Casio and styrofoam are the perfect intro to the album’s club-ready aesthetic. No doubt Gorillaz took notice of the rising bittune scene, which uses old game consoles for a “punk electronic” sound, and the banner-carrier is “Empire Ants.” If you find this style screechy, avoid. If not, this is a fun romp. Thank goodness Gorillaz are happy again.