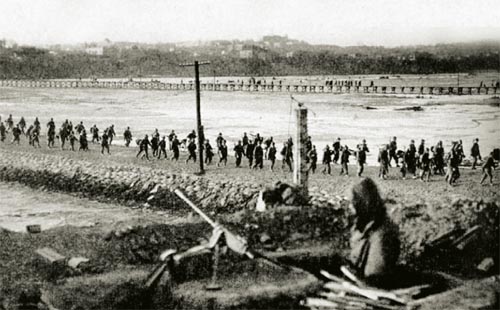 Pressured by Chinese forces, soldiers of the ROK 1st Division withdraw from Pyongyang on Dec. 5, 1950. Provided by Paik Sun-yup

Last week, General Paik recounted his reluctant agreement that the UN and Korean forces would have to withdraw, faced with a relentless Chinese assault.


Malaria is painful. During the daytime the body constantly shivers. Fortunately, it was still winter, when the symptoms of malaria tend to be a little weaker than they are in summertime. Still, since the disease hit me at a point when we were in full retreat, the psychological strain it placed on me felt even greater than the physical stress would have been in summer.

During these trying times, one person always came to me with a little burner in his hands. First Lt. May, who had been with me and the ROK 1st Division since the Nakdong River perimeter days, would come into my quarters and start operating a little pump on the burner to put some life into it. On it he’d place a small pot to boil water for some hot coffee. At the ROK 1st Division there were many American advisers like him. The artillery and Air Force liaison officers were, needless to say, Americans, because South Korean forces didn’t have much experience in that field. Communications, intelligence and logistics were other areas in which American officers filled in. They communicated with the U.S. 8th Army headquarters and coordinated all the necessary support. Thus, I spent my whole day with these American officers.

The inspection of the front and reconnaissance of enemy positions were conducted with my staff and these American officers. A typical morning started with a general briefing of all the situations unfolding at the front lines with my advisers and the Americans. This was the time when issues ranging from ammunition and food supply status to the movement of troops was discussed and checked. As I am not an American, my communication with the advisers wasn’t perfect but there were predetermined military terminologies and as I listened to them every day, they sort of grew on me, so there wasn’t really a problem with communication.

Meetings with my Korean staff, who were in charge of personnel, intelligence, operations and the rear, took place whenever needed. Depending on the situation, I would call in a staff member or pay a direct visit to the person I needed to meet. Thus, usually the days flew by, and this was even more the case when there was a retreat.

Sometimes I couldn’t fall asleep at night and although most of the time I tried to refrain from doing so, it was then when personal thoughts entered my mind. I was always worried about my mother, my wife and my 3-year-old daughter but I tried not to think of them. During war, a commander can’t get sentimental and lose himself in thoughts of family. All the soldiers at the front were probably sharing the same feelings I had.

The weather that winter wasn’t on our side. The water of the Imjin River had turned into solid ice which couldn’t be broken up. It was no longer a natural barrier against the advancing Chinese forces. The frozen ground also made it hard to dig foxholes and trenches. 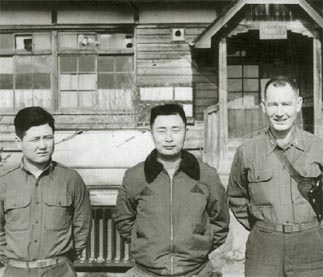 Gen. Paik Sun-yup in the middle with his staff of South Korean and American officers. The artillery and Air Force liaison officers were Americans because South Korean forces didn’t have much experience in that field. Provided by Paik Sun-yup

In the late afternoon on Dec. 31, the Chinese Communist forces resumed their offensive. After laying the ground for the attack with their unique flute and gong sounds, machine-gun and mortar fire soon followed. Then the enemy showed up in the flesh. Their numbers were just overwhelming.

The 12th Regiment couldn’t hold its line and gaps started to appear. Storming over the bodies of fallen comrades, the attack was a typical Chinese human wave tactic. First, the adjacent area between our 1st Division and the 6th Division started to waver. The 15th Regiment in reserve was sent into fallback positions prepared earlier, while I tried to get a handle on the situation.

As darkness descended, communication with units in the front stopped. The 11th Regiment was mostly holding its ground but the 12th and 15th regiments were being pushed back. In desperation, to prevent a breakthrough of the Chinese forces, I even used my engineering and signal units - and everyone else I could spare - but to no avail.

The achievements the 1st Division had made in its heroic stand at the Nakdong River and as the first unit to enter Pyongyang felt like a mirage now.

I ordered all staff and American advisers to move to the rear, with the exception of a few key staff members who remained with me at division headquarters at an elementary school near Paju. At the time, I felt a great loss of confidence. Later on, Lt. Col. Yun Hyuk-pyo, who served as my signal advisor, described how I looked at the time: “After making frantic phone calls you often failed to even hang up the phone, and just dropped the receiver while you talked to yourself about the commands you had just issued.” The situation was so desperate and my mind was so clouded that it felt dark all around me.

It was then that First Lt. May, a tall fellow with graying hair, wrapped me in his arms, carried me to my jeep and drove me to the Han River. He told me, “Commander, in war, sometimes you lose. Sometimes you win, right?”

But I couldn’t help but feel the anger creeping up inside me. Did this mean that we had to give up Seoul again? It seemed like that was the cold reality facing us.