Korea stays behind in organ donation

Korea stays behind in organ donation 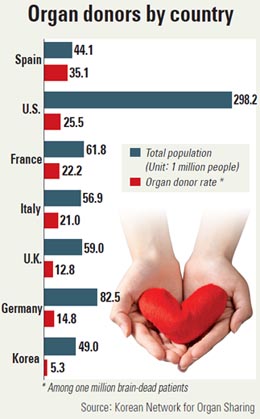 Each day is both a blessing and a curse for Oh Myung-hak.

Oh, a 57-year-old husband and the father of two daughters, is waiting for a new kidney due to chronic renal insufficiency. Oh endures six to seven hours of hemodialysis treatment three times a week for his bad kidneys. Due to diabetes and kidney malfunction, his sight has worsened since 2002, and he is now legally blind.

Oh received a kidney transplant in 1986 from a kidney donated by his father. But since the early 2000s, it started failing him. He has been on the waiting list for a new transplant at Seoul National University Hospital’s Transplant Center since 2004.

The average amount of time a patient spends on a waiting list for a new kidney is around three-and-a-half years, according to the National Medical Center’s latest data.

“It’s hard to carry out a normal life. The only thing I can really do is to wait until someone, unfortunately, is brain-dead,” Oh said.

He added that his wife also suffers from diabetes which makes it hard for them financially.

Despite reports which say that organ donations in Korea are growing, the level of donations per population here is far below the average of most developed countries.

There has been a big jump in the number of people who have signed up to donate organs in recent years, especially last year due to the influence of Cardinal Stephen Kim Sou-hwan, who died in February 2008. In 1990, the cardinal promised to donate his organs and followed through upon death.

Looking at the big picture, however, organ supply is hardly meeting demand. The number of people offering to donate organs in Korea last year was less than 1 percent of the population. An average 817 people die in Korea every year waiting for an organ transplant, according to NMC. Organ donations among brain-dead patients in Korea is 5.3 per million people, while in Spain, the United States and France, the rate is 35.1, 25.5 and 22.2, respectively.

“There has been many media reports boasting that Korea’s organ donation culture has improved greatly, but compared to other developed countries, the scale of Korea’s organ donations is insignificant - only one-eleventh of countries like Spain,” said Park Sung-kwang, a head doctor at the Chonbuk National University Hospital’s organ transplant center. Park said that the key reason for Korea’s low organ donor number is that people looking to become donors need to go through too much red tape.

“In the U.S., they ask you if you want to be registered as an organ donor when you get your driver’s license,” Park said. “It’s very simple. You just sign a form when you receive your license. But in Korea, donors have to actually go to a donation center or a large hospital to register to become donors themselves. They have to be much more proactive.”

Another reason cited by experts is the “time-consuming” process in Korea in judging whether or not a patient is brain-dead.

“On average, it takes about two days in Korean hospitals to finalize a verdict on whether someone is brain-dead or not,” said Kang Hyun-jin, head organ procurement coordinator at the Korea Organ Donation Agency, or KODA.

In Korea, a person needs to undergo multiple brain tests, followed by a final meeting with head doctors of the respective hospital and religious leaders participating in determining whether a patient is brain-dead.

“In countries like Spain and the U.S., this process simply doesn’t exist. With the delayed verdict, many times a patient’s family members change their minds on donating the organs. Also, many patients die during this evaluation period, making it impossible for them to donate certain organs,” Kang added. She said that KODA is working on simplifying the process. So far, agreement has been reached on decreasing the number of people in the decision-making process and excluding religious input, she said.

Cultural differences also play a part in the lagging organ donor numbers, experts say. “In countries with high donor ratios, there is no apparent aversion to sticking a knife in a person after death,” said Kang.

Professor Park agrees. “Korea’s overwhelming Confucian take on death, in which deconstructing the body is not seen in a positive light, makes it difficult for many Koreans to apply to be organ donors,” said Park. “Many parents of brain-dead patients say that they want their child to be buried in peace, as a whole person.”

Meanwhile, transplant-hopefuls like Lim Deok-yun, 42, are trying hard to stay active while waiting. Lim has needed a kidney transparent since 2006. Due to diabetes and a failing kidney, he is legally blind. Despite physical obstacles, Lim, a former child actor, finished a 2007 short film and won the director’s grand prize last year at the Persons with Disabilities Film Festival. “Every time the phone rings and it is a call from the hospital, my heart skips a beat. But I have had so many false alarms that I have basically emptied my heart of hope,” he said.