Getting ready for the final sting

Getting ready for the final sting 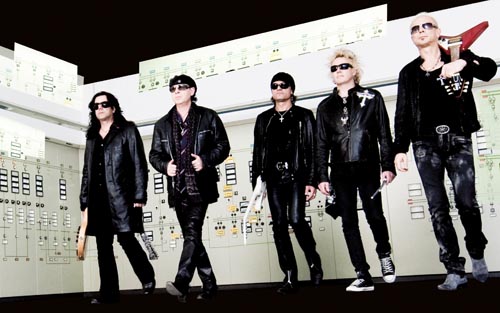 Hard-rock band Scorpions will head into retirement with a new album, “Sting in the Tail,” and a worldwide tour that begins in May. Provided by Sony

Legendary German band Scorpions shocked the world’s rock scene two months earlier with the announcement that it planned to disband. The group is bringing its 40-year-old career to an end with a final album, “Sting in the Tail,” which comes out today.

“Sting In the Tail means ‘let’s go crazy, let’s have fun.’ This is our last album, so we wanted to go wild, filled with the spirit of rock,” guitarist and band founder Rudolf Schenker said in a recent e-mail interview. “This will be a very interesting album.”

Although the band has decided to retire, before it leaves the scene it will make a final, worldwide, years-long tour that will start in May, Schenker said.

“We’re hoping to meet you very soon. I am already very excited to perform in Korea, a beautiful country with a great culture.

“Meet us [at the Get Your Sting And Blackout World Tour]! We’ll rock your world like a hurricane!” said singer Klaus Meine.

Schenker and Meine did not say when Scorpions would visit Seoul.

The band, best known for its early 1990s hit “Wind of Change,” has come to Korea on several promotional tours and two concerts, but the last time they hit local stages was 2007.

When asked if the band has ever regretted its decision to bring down the curtain on their career, Meine said, “We’ve been in this crazy rock world for four decades now.

I think this is the right time to end things up. We thought it was wise to wrap thing up when we’re at our highest level.”

“We don’t want to stand in front of our fans exhausted. We don’t want to hear things like, ‘They used to be very good on stage,’ either. We are planning to do a world tour for at least two years, so it’s not completely the end.”

Q. What do you have to say about the state of hard rock and heavy metal today?

A. Schenker: It’s for special fans, it’s almost like a niche. Heavy metal, hard rock fans - they always like the music, they’ll never change, I guess. But the music is not being played on the radio, it’s basically not being played on music television apart from a few countries, so it’s not popular anymore, the way it used to be. Everybody listened to that music in the ’80s, but now it’s only for specialists. There are still so many people who listen to it, but other musical styles have moved forward and are more in the public eye right now. So dance and pop is for everybody, and hard-core heavy metal is more for the specialist. But a rock band like us has ballads like “Still Loving You,” which will be played everywhere.

How would you like to be remembered by fans across all generations?

Meine: I want our fans to remember Scorpions as a great live band. I also want our songs to be remembered and sung by generation after generation.

What was the greatest moment of Scorpions’ career?

Meine: In 1991, before the fall of the Soviet Union, Mikhail Gorbachev invited us to Russia. It was huge for a German band to visit Russia at that time. Our parents’ generation went to Russia with guns, but we went there with guitars. It was a glorious moment. It seemed like we were the only band playing in front of Gorbachev.

What does “music” or “rock” mean to you?

Meine: It’s my whole life. If our parents’ generation lived through war and pain, our generation is a post-war generation. The Beatles made a music revolution. Rock music also began to open its era. I was very inspired by rock music at that time and I’m still playing it now.

What would be your encore song in the final show? And why?

Schenker: Our final encore will be always “Rock You Like A Hurricane”. Because that’s what we’re aiming to do.