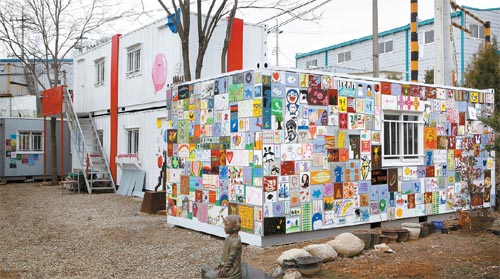 Foreign factory workers, local residents and professional artists painted the tiles plastered around four sides of a container gallery in a neighborhood in Hwaseong, an hour and a half away from Seoul by car. by Oh Sang-min.


Next to the overpass, on which bullet trains pass by every 10 minutes or so, stand a few shipping containers in an open area of Hwaseong, Gyeonggi.

One is covered by a mosaic of hundreds of colorful tiles, all painted in different styles, by different artists. Some were obviously done by professionals, but most of the others bear the mark of varying levels of artistry. Some are children’s works, while others sport Southeast Asian phrases that seem like messages to the world.

These tiles represent what this 1,200-pyeong (4,000-square-meter or 1-acre) open space is all about. “Naegeonneo” - a Korean term for “beyond you and me” - is an art village for foreign workers, local residents and Korean resident artists, and each group has contributed some of the tiles.

One smallish shipping container serves as a gallery that is open to everyone, around the clock. Last week, works by Korean illustrator and sculptor Jeon Gyeong-seon were on display in the small space, which spans only a few pyeong.

Several steps away is a free book cafe that houses hundreds of books on art and the Korean language, a few tables and chairs and teas from various countries.

The container gallery in the making. by Lee Youn-sook

Sculptures and installations, and a few more containers, are scattered across the open space. At the back of the art village is a field where grains and vegetables are grown free of pesticides.

Foreign workers from nearby factories drop by the gallery and the book cafe with their families, mostly after work or during the weekend, says the village’s founder and owner, Lee Youn-sook.

Often on Sundays they gather at Lee’s house in the corner of the village to cook and share their traditional food, learn the Korean language from volunteers and mingle with resident artists. Other events such as barbecues and Korean traditional performances are staged there with the participation of neighbors.

At the two-story container wrapped in a huge red clay ribbon, like a gift box, is a flea market where living necessities such as clothes are sold at 1,000 won ($0.88) each. The flea market relies on donations from outsiders and local residents.

Most of the foreign visitors here “had no experience at all of visiting a gallery, not to mention seeing artwork,” Lee said. “We invite pieces of art that are approachable and easy to understand. [Foreign workers] are very happy for the chance to appreciate art.”

Hui, 30, and Juen, 26, are two of the frequent visitors to the art village. Both Vietnamese, they met while working in the town and plan to marry soon. As factory workers who have to work after hours on the weekdays and sometimes on Saturdays, they found it very difficult to travel for cultural experiences to the nearest large town, Suwon, not to mention Seoul. The art village has been an “oasis,” they said in unison. 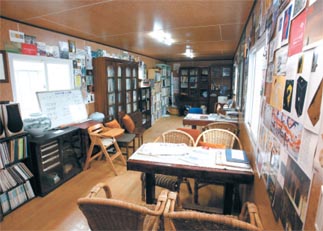 A container book cafe open 24 hours to everyone. by Oh Sang-min

The gallery opened earlier this month mainly to cater to the international migrant workers in the administrative district of Danha-ri, Bongdam, a onetime agricultural village that has transformed into an industrial town in the past three years. Unplanned development left some 70 small-sized factories producing light industrial goods such as tires and industrial cotton dispersed across the desolate plain. Most of the factories have around 200 employees from countries such as Vietnam, Thailand, the Philippines, Nepal and Mongolia, and the workers tend to migrate to different factories in different industrial towns every three years, the minimum contract period here.

Lee, who has been a sculptor for three decades, says the village was created by chance. After organically farming the land since the early 2000s, she bought the space in 2007 and invited a dozen budding artists to set up their studios there. The resident artists were asked to pay only for gas and electricity. Coincidentally, at the same time foreign workers began to swarm to the village, which was then kick-starting its transformation to an industrial town.

“The artists were very frightened of the foreign workers they bumped into, for no apparent reason. Some of them proposed that we build a huge wall around the village to block even eye contact with them,” said Lee.

But instead of accepting that proposal, Lee hit upon the idea of opening the space to everyone to raise the foreign workers’ and artists’ awareness of each other. She submitted an application for financial aid to the Suwon Hwaseong Cultural Foundation to buy the shipping containers.

“Migrant workers are familiar with containers. They work and sleep in them. That’s why I chose containers,” Lee said.

Lee and her husband originally ran a private art institute for budding artists in Suwon, but in the late 1990s they shut it down and hit the road. They traveled across the Himalayas, Nepal and Africa and the experience was eye-opening for them. As they traveled, they become more open-minded to different cultural traditions and more comfortable with Southeast Asians - and came up with the idea of making them more welcome in Korea.

She says with modesty that her series of projects is not meant to be seen as philanthropy.

“I think of them as an art project and I’m enjoying it very much,” she said.

Foreign wives of migrant and Korean workers make hair bands in a craft class at the multicultural cafe in the basement of the Seongdong Migrant Workers’ Center in eastern Seoul. The cafe opened in January. By Oh Sang-min

Korea is seeing a rapid rise in the number of migrant workers, which topped 850,000 as of last October. But despite their increasing numbers, the cultural facilities open to them are still limited. A survey of 825 migrant workers and marriage immigrants by the Culture Ministry in June 2008 showed that their low level of proficiency in the Korean language, scant free time and wary reception from locals hindered their entrance into the cultural side of Korean life.

Geographical distance and financial hardship are also cited as barriers, as compared to white-collar workers from more advanced Western economies. Almost 70 percent of the survey respondents said they spend less time on cultural and leisure activities than they did in their home countries. Only 9.1 percent had an opportunity to learn Korean cooking or other crafts, although 60 percent said they would be willing to learn them if they were given the chance.

Lee’s are not the only efforts to make the newcomers more at home. To meet the rising demand, Seongdong District in eastern Seoul opened a “multicultural cafe” in the basement of the Seongdong Migrant Workers’ Center building in January. The administrative district has some 10,000 foreign workers and their families, accounting for the largest of such demographic slices in Seoul. The center has been in operation since 2001 and World Neighbors, a private organization, was commissioned by the ward office to run it.

Although it’s called a cafe, it doesn’t charge for tea. In fact, it’s a multifunctional space open to all from 10 a.m. till 4 p.m. every Tuesday through Friday. Foreign wives of both migrant and Korean workers gather there, drinking tea, listening to music, doing Korean language homework, and learning practical crafts and Korean cooking from guest lecturers in Korean. On an irregular basis, the cafe offers music and art therapies to ease the stress from a new language and culture. A craft class takes place every Thursday and costs 10,000 won per month. Last week, 10 women wearing name tags with their names in Korean letters made hair accessories with plastic frames and colorful ribbons.

The women come from different countries - the Philippines, Vietnam, China and Mongolia - for different reasons. Erka, a Mongolian woman in her 50s, said she came here two years ago with her husband, a Mongolian who works at a factory here.

“I have plenty of time alone when my husband is at work. I study Korean, have lunch and do Korean language assignments here. It’s so nice,” she said.

Jantisang and Wintizang, who are Vietnamese and both married Koreans here last year, became friends through the cafe. Jantisang, 22, is four months pregnant, while Wintizang, 24, has a six-month-old son. She brought the baby to the class and the Korean volunteers took turns looking after him. The two women can barely say a complete Korean phrase, but they said snow makes them very happy.

Kim Se-jeong, who works with World Neighbors, said she initially doubted whether the cafe’s teaching programs would work.

“I didn’t expect it, but the participants say the lectures are very helpful. We try to teach them crafts that are practical enough to be used in their daily life, like making cosmetics products and soaps,” she said. “They say they were really bored before because they didn’t really have a common place to hang out and make friends.”

The cafe is now preparing to introduce a group psychological counseling session.

“We’re in our infancy but we’ll gradually expand our programs to help them tackle mental issues originating from residing here. Their stress not only comes from language but also from Korea’s unique family structure - the strong in-law relationships,” Kim said.

She added that foreign wives in the district have been reluctant to pay visits to local spots because of the prejudice many Koreans have against them. The trend of older Korean men in rural areas finding younger, poorer spouses in Southeast Asia - and media reports of their miserable lives here - mean that many Koreans believe all Southeast Asians fall into the same category, Kim said.

“Nowadays, even elderly Korean bachelors in urban areas with good income and education levels are increasingly looking for wives from Southeast Asia. People shouldn’t have a biased opinion about foreign wives. Prejudice leads to a chain of prejudice,” Kim said.