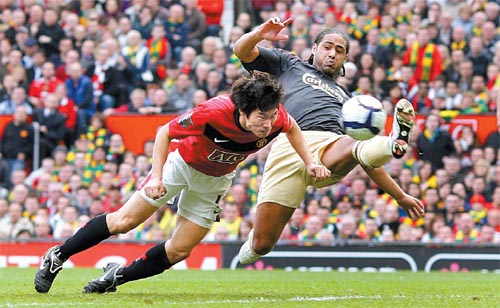 Park Ji-sung connects on a diving header to score the winning goal in a match against Liverpool early yesterday. Manchester United won 2-1. [AP/YONHAP]


MANCHESTER, England - Park Ji-sung drove in a game-winning header against archrival Liverpool early yesterday at Old Trafford, bringing Manchester United to a 2-1 victory, the top spot in the league standings, and within sight of its fourth consecutive league title.

In a tight game with the score tied at one goal apiece, Park connected on a Darren Fletcher cross with a diving header in the 60th minute of the match. It was Park’s second league goal, third total goal of the season and 15th career goal with Manchester.

“We desperately needed a win. It feels great to have scored the game-winning goal,” said Park.

Appearing in the game as a center midfielder instead of his usual left winger position, Park clashed with Argentine midfielder Javier Mascherano on several occasions. Park called Mascherano “a very tough and energetic player who knows how to lead his team.”

“We’ll meet him at the World Cup,” Park said. “I was told to keep him in check. I wasn’t asked to mark him like I did [Andrea] Pirlo [of AC Milan] but I kept an eye on him throughout the match.”

Despite the positional change, Park said he did not have any difficulties.

“There’s no huge difference. Whether it’s the winger position or central midfield position, you need a lot of energy,” he explained.

Park has been playing well of late, earning an offensive point in his past three matches. He scored a goal in the Union of European Football Associations Champions League round of 16 second-leg match at home against AC Milan. He then assisted on a goal in the March 15 match against Fulham.

The only other time in his English Premier League career Park has earned an offensive point in three consecutive matches was in December 2005.

Park was one of the last players to emerge from the dressing room. Looking fatigued, he explained the delay was due to post-match treatment for a small injury he received when heading in the game-winning goal.

“I had a slight cut on the left side of my head. It just needed one stitch,” he said.

With yesterday’s win, Manchester improved to 22 wins, three draws and six losses on the season for 69 points, and moved ahead of Arsenal, which now sits in second place with 67 points. Chelsea tied Blackburn 1-1 and remains in third place with 65 points.

Manchester United will next play Bolton on Sunday. The matchup will be of huge interest to Korean football fans because the game features two national team midfielders, Park and Lee Chung-yong.

“I think Bolton is clear of the relegation zone at this point. We’re competing to win. I’m hoping Lee scores in his own net to help our cause,” joked Park.

“It’s always special to go up against another Korean player in league play. He’s the youngest of the Korean players I’ve faced so far. He’s been playing great in his rookie season and I’m looking forward to Lee playing a good game.”