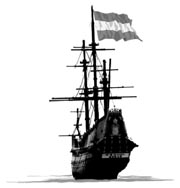 Some 300 years ago, the Netherlands was the dominant player on the world’s trade stage. The Dutch East India Company, which was one of the first joint stock companies in the world, imported spice, silk, porcelain and gold from the East. It was a multinational business conglomerate that pursued shipbuilding, shipping, financing, resource development and general trading. Amsterdam was also home to one of the world’s first stock exchanges.

The economic history of the Netherlands could be summed up as “a small country that achieved great success.” The country of 1.5 million became a great power thanks to adventurous spirits who took to the sea and the constant pursuit of innovation. The vessels they built could load more cargo, and the joint stock company system helped diversify business risks. Innovative business and financial systems also led to the accumulation of wealth.

Also behind the Netherlands’ rise was the spirit of tolerance. In the 16th century, many Jews migrated to the Netherlands, leaving behind Catholic countries that pressured them to convert. By virtue of this, the country could benefit from the capital and personal connections possessed by the Jews, as well as their keen insight into business.

Rivalry with the Netherlands stimulated the growth of the British Empire, and Dutch influence in Japan spurred it to become the first Asian country that was Westernized. Last year was the 400th anniversary of the opening of trade between Japan and the Netherlands.

Korea first came into contact with the Dutch, and the West for that matter, through Jan Weltevree and Hendrick Hamel, employees of the East India Company whose ships were wrecked on Korean shores in the 17th century. Weltevree brought knowledge of the age’s modern weapons, useful for a Korean army that was preparing for a war against its neighbor in the north. And Hamel introduced Korea and its people to Europe after publishing his famous journal on his 13-year stay in Korea. But no trade took place between Korea and Europe, and Korea remained a hermit kingdom.

Our country has grown into a land of shipbuilding, shipping and trade that crisscrosses the entire world like the Netherlands did long ago. Korea doesn’t feel like such a small country anymore.

As a vice finance minister reportedly said, “Koreans have a spirit of perseverance. They rise up again like a tumbling doll. Korea is no longer an underdog.” He said this to business leaders interested in investing here when he met them in New York, once known to its Dutch colonizers as New Amsterdam.

If Korea can continue to lead in pursuing innovation, and at the same time demonstrate tolerance toward others, we will be known as a small country that has achieved great success, like the Netherlands before us.